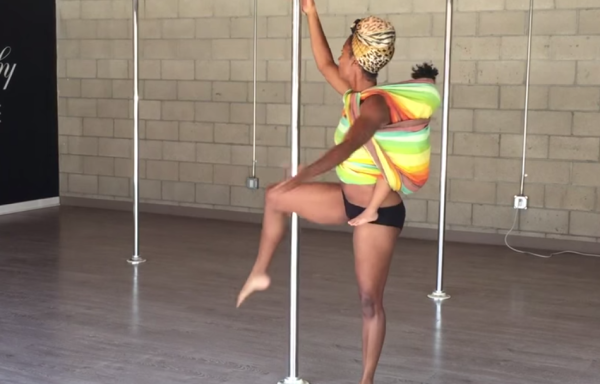 Okay, so the title of this post is crazy, right? But not when you meet the mommy behind it.

Ashley Wright, or Ms. Wright’s Way (as she’s known online) is well known in the black online mommy community as an avid and vocal supporter of gentle and natural parenting practices like baby wearing and breastfeeding. But before Ashley was a mommy, she was a pole dancer who taught classes and performed. And she has continued dancing along with her child.

Some find the videos of Ashley dancing beautiful, others feel they are downright inappropriate. One of the first dancing videos Ashley posted drew so much controversy that she was invited to the talk show The Doctors to discuss it.

On the show she took a lot of heat from Dr Rachael Ross who felt the pole dancing set a bad example for Ashley’s daughter. To which Ashley responded,

“I think that what my daughter sees is mother is unapologetically herself.”

You can see the exchange below.

What do you think mommies? Is this a beautiful expression of movement? Or is it inappropriate? And for those who are mothers, how do you retain your sensuality after having children? And how much of that sensual expression do you expose your children to?

I think people with no talent to actually practice pole dancing just see it as a stripper thing. Pole dancing is actually beautiful, and allows you to be sensual and many people really need that and love that — I do. I think it’s good she doesn’t hide that from her daughter. The only legitimate concern I have is that my daughter shouldn’t be compromised while I’m doing my dancing — is it for me or both of us. The baby can’t tell you if she’s okay when she’s on your back and there is a reason little kids don’t… Read more »

She is dancing. NOTHING more and nothing less. Similar to watching her mother do Ballet, Modern or tap dance. NOTHING MORE. THE DR needs to wonder what her baby sees with all that fake hair in head. When you point fingers three point back at you.

People love to worry about someone else. Who cares??? Last time I checked SHE WASNT YOUR DAUGHTER. This is a society that makes women, especially black women, feel ashamed for being sexual. You conservative women over 30, go ahead & go back to the home page 🙂 no one wants your negative old fashion internet rude thugging vibe on here. That mother is telling her daughter that when the time comes, you can be yourself as sexual or non sexual as you want. She’s a great mom & y’all are just stuck in your ways. Move on, you’re not gonna… Read more »

What’s with the ageism? I’m over 30 and see nothing wrong with this mother pole dancing with/without her daughter. Stop pigeon-holing; conservative ideologies are held by old, young, black, white, religious, atheist, etc.

I don’t know what being over 30 has to do with anything. You can make a point without insulting a whole demographic. That was extremely rude and unnecessary, so maybe you are the one doing the rude internet thugging (which is not even a word). Being under 30 does not make your opinion matter more than anyone else, and by the way, one day you will also be over 30. Hopefully you will have matured some by then. Anyway, I am 34 and I assume I am still allowed on the internet. I absolutely loved her dancing. All I could think… Read more »

Moms were individuals with desires and ambitions before having children. They exist beyond motherhood and don’t have to stop being who they are. There’s this annoying societal perception that motherhood and sensuality are mutual exclusive. How do you think she got pregnant?! This perception robs women of their individuality and divorces complexity of womanhood from motherhood. It’s why we are so judgmental of a mother’s choices and become a horde of concern trolls regarding their children’s welfare. That parent is responsible for creating the context by which their child understands their choices. They can be an example of excellence or… Read more »

I agree with your whole post, but especially the part about her being an athlete. All I kept thinking as I watched the video was how fit she is and how strong her upper body must be. Nothing negative crossed my mind.

*claps* You said everything I came here to say and then some.

It’s obvious that Dr. Ross (and many others) doesn’t get the clear difference between sexually explicit, booty popping pole stripping that is done for the consumption of men and actual pole dancing done as self expression and as an art form and/or fitness. There is a distinction, and Ashley Wright is of the second variety. If there was no pole there, Nobody including Dr. Ross would be saying anything about Ashley Wright dancing with her daughter in the room. If this mother was doing ballet or modern dance (which involves a lot of open legs in the air), just about… Read more »

The only issue I might have is the safety of her dancing with her daughter so close/strapped to her, simply because she was so dangerously close to her mother’s legs as she spun around. I wonder if, even as an expert dancer, an accident might happen. But aside from that, I have heard that pole dancing is great exercise and it looks absolutely beautiful, I don’t know why that doctor was so quick to equate this form of dance to the daughter becoming a stripper, even if we usually associate it with strippers. Maybe the mum could tone down some… Read more »

The good thing is that I’m sure she was aware where her daughter was. If she was getting to close she just lifts her feet or tuck her legs and her legs will be out of the way. Baby’s unfortunately have gotten knocked over all the time when the parents aren’t even doing that. Those doctors sometimes I’ve noticed that once they have something set in their mind that something is shameful then they will do everything to shame you on it and make you feel ashamed, but I like that she didn’t back down.

more narcissism. so over it. honestly, she’s not proving/disproving anything by doing this. there aren’t really any lessons to be learned from this particular dance.

she has done other videos spotlighting herself as some sort of breast-feeding activist. i wish people who were doing important things got more attention rather than self-branders promoting themselves.

Instagram has definitely become the best platform for those types.

There is a lot to learn from pole dancing. it’s just like any other dance only it is around a pole. It is actually an off branch from Chinese pole which was performed by males. if it’s not for you then fine, but don’t assume that no one else will get anything out of it. People want to bring awareness to things that maybe different or uncomfortable, or even unfair. If she wants to speak up on it then that’s fine, since you don’t care for her then you just know that when she is on social media etc. to… Read more »

I think that it’s weird because I don’t think the baby’s head should be shaking so much when the mother moves, it could be harmful to her whether or not her soft spot is filled in. But I don’t think there is anything wrong with the mom still pole dancing. She’s not taking the baby out to service johns.

Just remember there’s the word conservative in front. Don’t ignore it, & if it does not apply to you move on. I was going at the many rude older women who, on different sites, were saying that they felt that they weren’t feeling this “younger generations parenting methods”. I’m very mature honestly, this was for a certain group. Not all women over 30, just the rude old fashioned ones. Plus I don’t respect the way they went in on the mother so I got rude. I won’t apologize for what I said, but I will say my approach could’ve been… Read more »

Love everything about her and her videos.

Just because she has a pole doesn’t mean she’s a stripper. I have a pole at my house and I do not strip at the club. Its a different way to exercise. what do you mean where is her husband?! her husband has no say in what she decides to do for her fitness regimen.

I love pole. I don’t dance at the club, it’s only at home or at a dance studio, but my instructor poled all through her pregnancy and after she had her kids and man she got her body back in about 4 months time. Now of course you don’t roll on your stomach and go upside down when your pregnant you do walks slow spins and tiny lifts if you can. Whatever you do before you were pregnant for exercise you can do while you are pregnant only modified. I don’t really like watching the Doctor’s too often because sometimes… Read more »

Does she want HER daughter to see her mother hiding under bleached blonde hair? See there is always something someone could throw back at you that they don’t like about YOU. Get your life and stop worrying about mine please. She was unapologetically beautiful.

So, this child sees mom being, “unapologetically herself”. No, this child has no idea what that means, she sees mommy flying and playing. She never really said what she was trying to express. It’s inappropriate for a child to see sexual/sensual behavior because they may imitate what they see. I know some people think it’s cute to see children acting like adults, but I think that’s what gets a lot of young people in trouble. It attracts the wrong type of attention and exposes them to things that they aren’t emotionally or physically mature enough to handle.