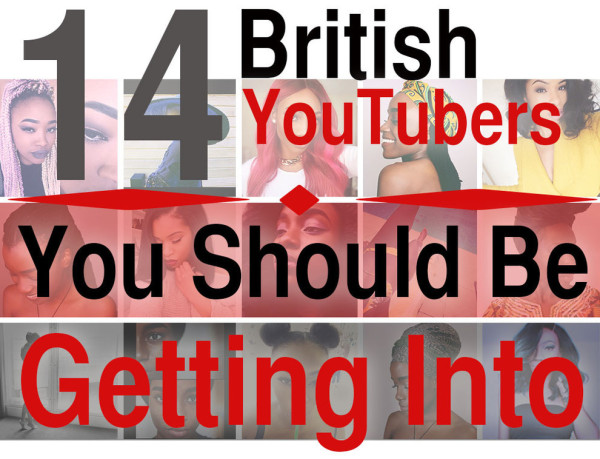 On April 21 Buzzfeed writer Bim Adewunmi compiled a list of top UK beauty bloggers in an article entitled 14 UK YouTubers Who Will Transform Your Fashion And Make-Up Game.

The listed featured both up-and-coming and more established beauty vloggers, with channel subscriptions ranging from a few thousand to half a million. The featured vloggers were all beautiful women with great tutorials — and they were all black. This did not sit well with many Buzzfeed readers who felt the article was misleading by not including “Black” in its title. Here is a sampling of comments;

“This post was quite misleading. Your selections were all black women, but there was nothing to indicate that it was. Being Hispanic, Im wondering why there wasn’t anyone OTHER than black women that i could relate to more like with lighter skin tones. Im not saying DONT post things like this, just make the title say exactly what I’ll see so i wont click it if it doesnt pertain to me.”

“This article isn’t diverse enough. Asian, Latina and white women need to be represented too.”

“It’s clear to see from all the immature comments too that many people are like ‘well now you know how it feels!’. Yeah, ok so they’re right, white women are far from under represented and often black, Latina and Asian women have little to none representation in fashion/beauty. Which isn’t right. Having said that, the solution is not to get rid of representation of white women; that would just be racist to white women. Yes, it does exists. Not half as much as with others but it is there! To say otherwise is just ignorant. The solution is to learn from past mistakes and make the representation EQUAL from now on.”

“You post about four black ladies? Post about four white ladies too. And four Asian ladies, and four Latina ladies… Etc. It’s really not that hard!”

“Why are there no fairer skinned women featured on this post? Nowhere does it say “for dark skin” on this article.”

“Ffs Buzzfeed. Sort it out.
First that models post and now this? You need to retrain your staff on diversity.”

“But there’s so many other great UK beauty gurus!! Who cares that all of these women are black? It’s just the fact that this isn’t a good representation of UK beauty gurus! People like bubzbeauty, pixiwoo etc. deserve a place on this list as much as any other strong, confident woman.”

But many readers pointed out that there are countless beauty lists that are all white, and no one questions it or even blinks an eye. Disgruntled commenters, they pointed out, were simply experiencing what black women experience almost every day, and they were making the assumption that they — as white women — couldn’t learn from tutorials done by black women, when black women are often expected to adapt to a beauty culture that comes from a white point of view.

“I hope everyone commenting here that the title didn’t make it clear enough that the list was all black women, saying that “black” should have been in the title, or complaining that this list “lacked diversity” leaves that comment on EVERY SINGLE LIST LIKE THIS ON THE INTERNET THAT ONLY FEATURES WHITE PEOPLE.”

“I love the controversy this article caused by not stating the bloggers were black, if it was all white bloggers nobody would request that the title stated it ?”

“the thing is…WOC are always subjected to read lists that either do not pertain to them in anyway, or include the obligatory 2 POC pix so that the author feels like the article is culturally well-rounded. Those lists don’t include “White” in the title to deter us from reading them… spare me your anguish at having spent a few seconds scrolling through a Buzzfeed article that excludes you and your beauty needs. Come back when you’ve felt that exclusion for 25 years…or 375 years, whichever comes first”

“Articles rarely feature (realise I do not say cater to) feature black women ever. Because when a black girl creates a beauty video for all women, due to her skin colour, by default she is only allowed to cater to black women and nobody else? You are a lot of things that is wrong with society.”

The interesting thing about all this is that, according to the URL, the original title for the piece started with “For Black Girls Who Have Considered YouTube When Diversity…” It cuts out from there, so I don’t know what the whole title would have been, but it was originally targeted to black women.

The post’s author, Bim Adewunmi, wrote a follow up piece entitled An Article About Black Women Shouldn’t Have To Come With A Warning Label where she asked the very powerful question, “What is it that prevents other people from seeing themselves in [black women]?”

What is it that prevents people from seeing themselves in us? What is it that you see in us that so easily precludes this precious relatability? What do you think we so profoundly lack, that makes you shut down so comprehensively? So much so that something as innocuous as a make-up tutorial is enough for you to walk away wholesale? What makes our existence so extracurricular to yours? Why must our place as the norm be so hotly contested? Why should we hyphenate ourselves, introduce addendums, and signpost our presence? Why are we required to call ahead in the dark, to thwack the bushes, to make sure those who startle easy are aware of our coming?

Ladies what do you think? Was this a poor choice of title on Buzzfeed’s part? Or do you think the post and title are legit as is?

I find this very interesting. People are always talking about how offended black people get over little things and how oversensitive we are… pleeeease. The minute we have anything, white people are up in arms. All of a sudden they want to cry exclusion and the need for diversity. It’s a farce. They’re just mad they’re not the center of attention in this one tiny little space. Seriously? Many prominent fashion and beauty outlets don’t even feature WOC. I remember trying Frizz Ease once to tame my coils. Looking back, I laugh but we are just not in the default… Read more »

“Their outrage outs their grasp and desire for white supremacy.”
EXACTLY!

LOL! Now this is a classic example of when the shoe is on the other foot. Now I wonder if those complaining got met with the same common and dull response of…“you’re being too sensitive.” Lol just smh. I could attempt to answer the questions posed here by the author, but people aren’t ready for the answers, because most can’t handle the truth…and contrary to popular belief the truth does NOT hurt, quite actually, the real TRUTH shall set you free…when we seek it, we will find it.

Poor white and asian people. I guess they realized that they’re not the only standards of beauty anymore.

Exactly! Most such posts are not labeled as being only for whites but often only include white or white-appearing people. Yet I’m expected to see this as just “normal” and not in need of a disclaimer. I’m expected to just take what applies and let the rest fly or adapt it on my own to meet my needs. I’m expected to ignore erasure and lack of inclusion. They can do the same for once.

I find the post amusing. The title and the article are legit. People need to stop presuming that articles from countries with diverse population will be labelled to reflect that.

This controversy is very funny. LOL. I believe my point of view is a mix of all that have been written. The same way we ask for représentation and diversity, we should not fall in the easy temptation of all black which is not fair for white women but above all for other minorities. Then I also think you can find some great bloggers/vloggers from different origins. All that said…I want to say: Well well…welcome in our world where a list of “10 artists to follow in 2015” or ” 15 nice updos” etc and not one of them will… Read more »

There are oodles of lists of Top # of ABC Bloggers you need to know lists floating around that contain a certain “type” of blogger. NONE of them need to be qualified by race. If you click on the list and it doesn’t apply to you (like I’d seen DOZENS of times), then click that back arrow on your browser and keep it pushing!

Oy, I don’t have time to get annoyed with white people today.

Well well well! White people hate when they are excluded, ignored, and rendered irrelevant in terms of beauty?! Ha! Welcome to our world!!! And since when do they give a care about a lack of diversity when it is all white?! How dare they mention Asian and Hispanic, like those groups ever mattered before! The hypocrisy, sense of entitlement, and hubris is in their DNA, I swear!!! SMH!

idk whats wrong with those people but Fusion of Cultures taught me how to do the perfect braid out and twist out, Shirley B. is the only youtuber i’ve found with my exact same skin complexion so all her make up tutorials work for me and Patrica Bright has some of the best clothing hauls.

All I can say is “YAY” because how many times are we not even included and the title doesn’t say “White Beauty Bloggers.”

We. Can’t. Have. Stuff. To. Our. Selves. DANG. Like can we get praised at least once without jealous races getting mad? Dang.

Why did the commenters feel that a description of who the bloggers were race wise would make any difference to the content of the article? If that’s the case ALL articles should be prefaced so a choice can be made by everyone if the subject matter will apply or not. LOL!!

How MANY articles have I clicked on about beauty for hair & makeup assuming I MIGHT find something relevant for me only to find in most cases it does NOT. did I feel duped? Tricked into clicking? No, in fact I’m not surprised most articles make no room for my beauty. Im used to it and you know what? I’ve learned WHERE to look when I do need to know tips specific to AA but i continue to click on all articles bc i make room for the possibility that some beauty tips are colorblind & can work for me!… Read more »

I commented before but don’t know where it went. Why did the readers feel that they needed to know the race of the bloggers in order to glean any information from the article? In that case ALL articles should indicate who wrote or is included in them so that readers can figure out if it applies to them or not.
Her reply is DEEP!!! Giving me life!!!! ” Why must our place as the norm be so hotly contested?” PREACH!!!!

Natural Power of Her Blog

I think the controversy of not prong the race nedded to happen. To see exactly how it feels when there’s all white people in am article and nothing is said. Its crazy how people really had to make ignorant comments because they were all black

The reality is white women arevmad bc thier “tutorials” arefilled withvlessons on how to make what we have naturally. 1. How to have fuller lips 2. How to properly fake n bake 2. How to create a ” texured” hair look, etc. Their mad bc we already have that and more and they want it but need surgery and stuffing and fillers to attain it.