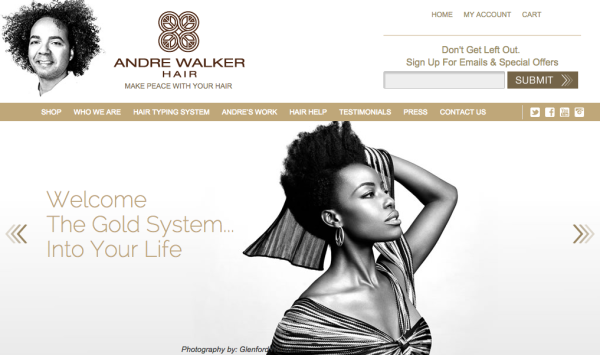 Remember Andre Walker? He’s Oprah’s hairstylist, famous for creating the hair typing system many women use today that puts Type 1 hair at the top, and Type 4 hair at the bottom. I’ve personally commented on the inherent discrimination against kinkier textured hair in his numbering system and I’m not the first to do so. Proving my point, Walker has thrown mega shade towards kinky hair in the past, calling it “the only hair type that I suggest altering with professional relaxing” since it has “limited styling options.” I don’t need to link to the dozens on BGLH articles featuring beautifully styled kinky hair to prove Walker wrong, do I? 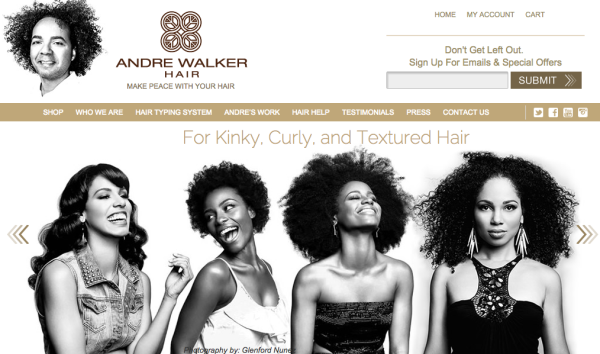 But that’s old news. What’s new is that Andre Walker has seemed to move on from his old views and created a haircare product specifically for kinky hair: the Beautiful Kinks Styling Crème Gelee. He’s made no mention of his past remarks, but in a recent interview with  with Naturally Curly, Walker said “it used to be that people looked at natural hair as unattractive or militant. It had all of these negative connotations. People wanted straight hair — the straighter the better. If you had kinky hair, that was bad hair. Today, kinky hair is considered beautiful. It’s something to be embraced.” 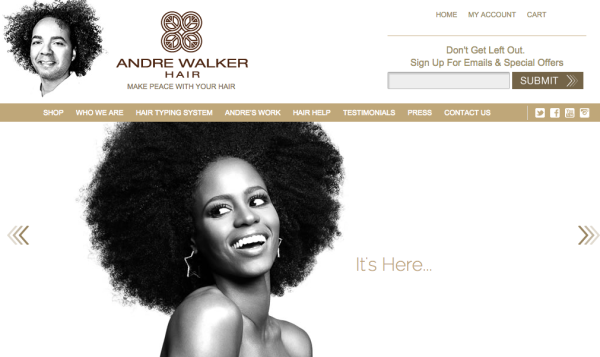 Considering there are even kinky hair models represented on Walker’s website where he sells his Gold Line of haircare products, it appears he no longer thinks kinky hair should be altered with relaxers. Or maybe he still thinks so, but wants a piece of that natural hair money pie. 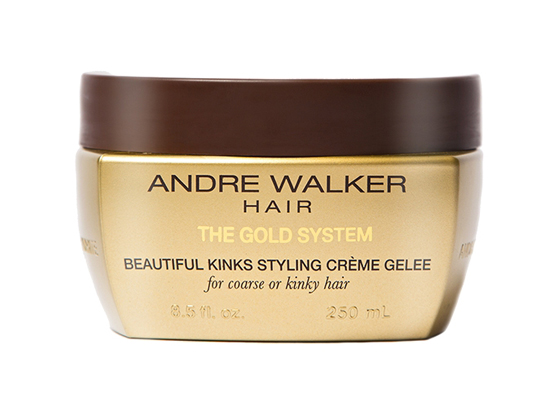 Do you think Andre Walker really understands and appreciates kinky hair, or is he just trying to make a buck off us?

Andre Walker is my favorite example of what happens when you stay stuck in the past and ignore potential opportunity. Back when the online natural hair community was still in its infancy — I’m talking about the late 1990s, before YouTube, before blogs — Andre’s system was THE ONLY measurement by which natural hair was evaluated. (LOIS and all those other ones came later. Yes, there were and are others, lol.) Despite the fact that some of us, myself included, emphasized that it was subjective and not based on science, it’s still considered influential to this day…all because of a… Read more »

How dare he, has anyone noticed the texture of his hair? The self hate.

Her reminds me of the elementary school black boys in my classes, who ridiculed black girls’ hair & hairstyles while sporting the same kinky texture on their own heads. All done in front of a classfull of ki.ds from other countries. I read them the riot act for displaying their self hate to the world. PARENTS put that crap in their kids’ heads. Can’t tell Andre off but I can keep my wallet CLOSED to his products.

While I do agree that his descriptions of type 4 hair were offensive, in the context of the looks that were popular in the 90’s for black women (and all women) it makes more sense. Wavy and curly hair weren’t even considered that pretty back then. It was all about stick straight hair. Period. Everything else was considered, quirky, wacky or militant. People say hair typing isn’t important, but there are WAY too many women who don’t understand that women who have curly hair didn’t MAKE it curly. I think it’s misleading to imply that products can change the texture… Read more »

You know I’m not a huge fan of hair typing but you do make it a point. Many think that you can apply some type of “custard” and your hair will be curly and not nappy or kinky. That is in a nutshell why many will not go natural and why many give up on their journey.

Undefined hair is every bit as beautiful as curls, but people aren’t as used to seeing it. Trying to maintain defined curls when that isn’t what your hair wants to do is hard, especially for women who are transitioning or new to natural hair.

You are absolutely correct about this idea that people have that curly hair comes out of a jar or bottle! It does not. And I agree with JenniD that some women choose not to go natural because they are afraid of the texture of their hair — they prefer curly as opposed to kinky. Some also leave the natural communty when they don’t get the results they desire and feel embarrassed by kinkier hair.

For the record, EVERYONE IS TRYING TO MAKE MONEY! Everyone and their momma is developing a youtube channel so they can monetize it and make money. Bloggers have monetized their blogs and make click bait posts…so they can make money. Once vloggers and bloggers develop a successful platform, the next thing they do is create hair products…so they can make money. No one is developing any revolutionary new products. Every new product I see come to market is a regurgitated formulae of something that has been already been done. So, I don’t think anyone is doing anything because they understand or… Read more »

He’s obviously trying to make a buck off us! We are not stupid.…our hard earned money will not be spent on this rubbish!

Disappointed that he reflected a negative stance, on such a high platform that Oprah Winfrey has given him. Shame on him of course for fear of being pro active natural. I have purchased his product, while vacay in PR, have to say, great save while away for hair care product rescue. Now back in the States, back to variety selection on demand for everyday budget, clear preference.

Trying to make a buck

I think Mr. Walker is smelling the Natural Hair Pie cooking and wants a BIG PIECE of it!!! A few years ago, when I was in NEED of some HELP with my hair and desperately searching for some good sound advice on what to do about all the damage my hair had suffered over the years of being chemically relaxed, I sought out his information, visited his website and explained my situation IN DETAIL, AND asked specific questions about what to do and how to save the rest of my hair…and if I recall correctly, I even posted pictures of… Read more »

it used to be that people looked at natural hair as unattractive or militant. It had all of these negative connotations. People wanted straight hair – the straighter the better. If you had kinky hair, that was bad hair. Today, kinky hair is considered beautiful. It’s something to be embraced.”

And by people he means HIMSELF.

And that picture of him and his hair. It’s like each ringlet is screaming “see see, I’m one of you nappy heads but not TOO nappy, I still got that good hair. Now give me your money, nappy.”

Hahaha. That tickled me. <3

Great article. I prefer to make my own products or use basic ingredients from the health food store.

>.> Now our hair is important because of money. That hypercritical A‑hole can jump off a bridge.

Trying to make a dollar out of 15 cents…he missed, he missed, he missed like this! Beat it, Andre! I would never give that man my money after what he has said. To be a person in such an influential position and to squander it by continuing to push an unnecessary standard. How many women and girls did he give a complex to…worrying about they had “limited, unmanageable hair” (I am paraphrasing). Kinky, coily hair is literally the only hair texture/type that can be styled to look like all the other hair types and then some…sounds like UNlimited styling options… Read more »

YES!! That is such a great point. I want straight hair? I can have it. Wavy hair? I can have it. My glorious fro? Done. A twist out? That too. I can literally do ANYTHING with my my kinky hair. For a professional hairstylist to think all this wonder on top of my head is limited and unmanageable makes me question HIS skill not MY hair.

Sorry, but that dude will never see a penny of my nappy money. That ship has sailed son.

If we are all so outraged and affronted why is his system of hair-typing used by most people? Shouldn’t we come up with a replacement? Or are we all too lazy and hypocritical to do anything about it. So, we won’t buy his hair products but we are all happy to continue to use his typing system that puts us at the bottom of the hair tree?

I’m not sure if most people know that he is responsible for the hair typing system. They just use it to help with finding products and techniques that might work for hair similar to theirs. I watched a lot of YouTube and found ladies who had textures that looked like mine and started experimenting but didn’t use the hair typing and still don’t.

So now that natural hair has re-emerged and having its moment it’s beautiful? It’s always been and women have spent decades trying to change it because of comments like his. While I’m reticent to vilify someone for all time because of a previous opinion, I would have liked to see him get back into the scene. Come to the conventions, open a natural hair salon, spread information… THEN maybe you can sell me something. But just to pop out of nowhere trying to get in the game and go on a redemption tour? Pass.

Swerve, Andre! You won’t get a dime of my money. I refuse to patronize the products of a man who spoke so derisively about natural hair, created a typing system that still divides the natural hair community, and is clearly tossing is hat in the game for profit!

The Styling Creme Gelee is actually very good and I’ve been using it for the past year and a half. My hair is 4a. It was the first product that I could use alone and gave me better results than the combination of other natural lines I had been using for six years. I even compared it side by side with products that had similar ingredients like aloe, avocado oil and shea butter and there was no comparison. The results were smooth and salon quality vs. looking like I just put conditioner, shea butter or gel in my natural hair.… Read more »

Mr Walker’s past comments were very negative. if he had acknowledged & apologized for the things he had said in the past, he might win a bit more support. As a infant natural (4yrs), I previously held negative beliefs about my own 4a,b,c textured hair & wore it in a chemically altered state for approx 26 yrs. I’m happy to say I changed my mind, with no regrets, & feel confident to say I will never return to other side. I love to see other people embracing their own nappy hair. I am also very happy that Mr Walker’s had… Read more »

He’s just trying to make a buck off us! Moving on…

He tried it, with his Richard Simmons sweating to the 1950’s throw back hair do.