Satirical Study Claiming Naturals Have Lower Self Esteem Causes Uproar… But Was It a Good Joke? 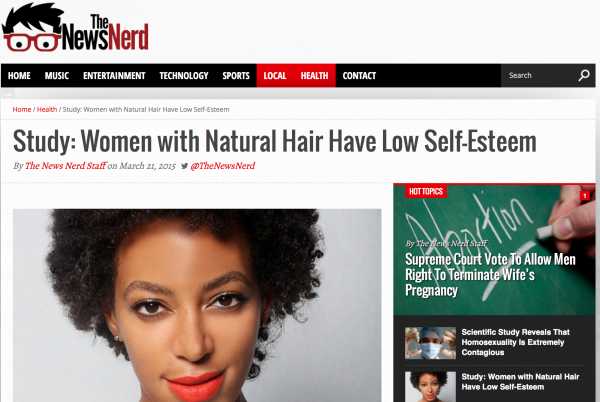 A few weeks ago, I saw an article circulating about black women with natural hair having lower self esteem than those who wear their hair straight. I was this close to being mad, but then they referenced a “study” done by Creme of Nature about this. Now, I know that natural hair brands aren’t exactly perfect, but come on, Creme of Nature knows better than that (looks like Creme of Nature also wasn’t feeling it, because the article now says that the study is by “Bountiful Hair”). 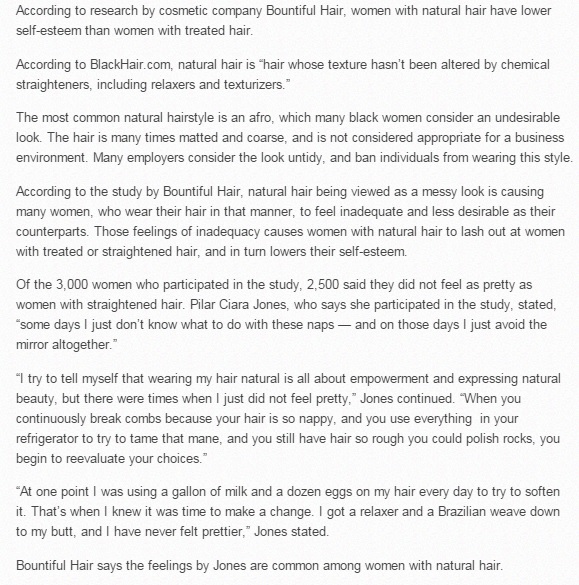 Upon further research, I realized that the article was supposed to be satire (insert eye roll here). Some women found it funny, citing that we needed to have a better sense of humor. Everyone has a different sense of humor, so I’m not going to criticize anyone for thinking it was funny. Some didn’t realize it was satire because a screen shot was circulating that didn’t really make it clear and then a slew of outrage began. Blogs posted about the study and I saw several Facebook and Twitter posts in response.

While I knew the article was fake, I personally wasn’t laughing. Why? Because, in my opinion, the opinions and ideas presented in articles or jokes like this aren’t far removed or far fetched enough to be considered funny. When you make a joke about not wearing your natural hair because you won’t be able to find a man, it sounds ridiculous, but it’s also a real concern of some women. Just think of all of the “What does he think of my hair?” type posts and videos. Or when an article comes out that says women won’t wear their natural hair because it makes them feel ugly — that’s not far-fetched or a hyperbole. That’s true for some women.

Don’t get me wrong, I can take a joke. However, some of the current criticisms of natural hair make it clear that it’s a bit too soon to make “jokey jokes” like this. Call me when children are no longer being sent home from school for wearing their natural hair because it’s “too distracting,” or news anchors aren’t fired for taking their weave out. When wearing our natural hair is no longer seen as “brave” or “militant” and it’s just our awesome hair that we love, I promise, I’ll be in the front row laughing.

Do you think it’s too soon to make jokes about natural hair?

Honestly, this doesn’t even seem satirical. When I think of satire, I think of exaggerated stories heaping with sarcasm and sass (like an Onion piece or something). This article really isn’t all that removed, as you said, from real issues and concerns that some naturals express. It kind of pokes a bit of fun at both natural and straight hair ideologies (gallons of milk, weave down to your butt); but not in a way that’s actually comical. I’d hate for someone outside of the black hair discussion to come across something like this, they’d probably get confused.

“ABOUT THE NEWS NERD The stories posted on TheNewsNerd are for entertainment purposes only. The stories may mimic articles found in the headlines, but rest assured they are purely satirical.” DUH!!!!!

MAYBE IF YOU READ THE ABOUT SECTION YOU WOULDN’T BE SO UPSET AND SPEND YOUR TIME ON REAL ISSUES INSTEAD OF A SATIRE SITE, LIKE THE ONION AS YOU SAID

I live to laugh, but my face didn’t budge when I read that. You do not get excused from being offensive just by throwing a “just kidding” onto your statement. Whoever wrote this was trying to be slick, and frankly I am not amused.

I think The News Nerd or whatever it is should take a front row seat right back in English 201 and learn the definition of satire. Voltaire and Orwell…let’s start there…

Maybe you need to learn the meaning, especially since the site itself is made up of nothing BUT satire which it says on the site in the about section DUH—–“ABOUT THE NEWS NERD The stories posted on TheNewsNerd are for entertainment purposes only. The stories may mimic articles found in the headlines, but rest assured they are purely satirical.”

It’s not that people can’t joke about natural hair, it’s just that this wasn’t a joke.
Even when satire’s being subtle, you can eventually tell it’s satire. This article actually did NOT look any different from a natural hair-naysayer’s comment. Where was the line that differentiated between being a joke and being serious because I never saw it.

There are a lot of ways people can poke fun at naturals, but this was definitely NOT it.

When little black girls stop getting sent home from school for having afros, then maybe this could be satire. This is just called piling on.

This artical is spot on. When will natural hair stop being so darn ‘distracting’!

THE WHOLE DARN SITE IS A SATIRE SITE SO YOUR REASONING IS FAULTY—IF THE SATIRE IS TOO HARD TO SPOT, THAT SAYS A LOT ABOUT YOU

I agree. This was definitely not satire, especially as there are probably a lot of sisters who haven’t returned or are newly returned to their natural hair and so who might actually believe this nonsense.

I think it was written to slow down the steady growth in numbers of sisters returning to their natural hair. Whenever they hate, you know we must be doing something right!

I guess I’ll continue living with my curly twirly nappy hair and my apparently low self esteem! (Silly me didn’t know my ESTEEM OF SELF was low until I read the article!) Lol

People need to lighten up. There’s plenty of satirical news going around they laugh at but when it’s directed at them they get their panties in a bunch and it’s no longer funny. So it’s ok to laugh at others but no yourselves SMH—I even got cursed out by women on FB when I pointed out it’s satire—they countered by saying it quoted a study from a reputable company SMH (again) and that it was deliberately keeping stereotypes going etc—-well ladies that is what satire is, poking fun at stereotypes but alas, Black women spent so much time and energy… Read more »