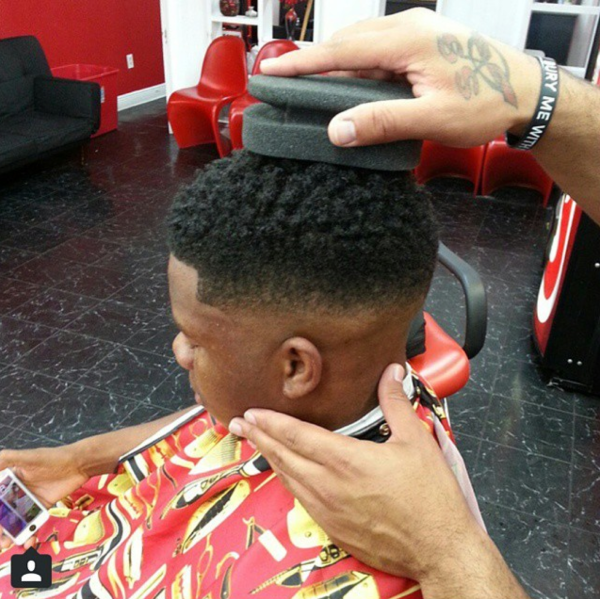 Recently, a buzz has been generated surrounding a new tool appropriately called, “The Curl Sponge.” Use of the sponge as directed promotes springy, coily curls.

In the video above, you can see the Curl Sponge creator, Youseff the Barber demonstrating the tool on a client by applying a spritz then rubbing the sponge on the hair soft, circular motions.

The results are similar to that of a coil-out.

Have you tried out the Curl Sponge? Do you think this is a tool you could add to your natural hair care regimen?

My nephew would love this thing.

I have seen Youtubers do this with regular sponges. I wish I knew about this method year ago when I had shorter hair.

Word from a Natural: Please drop the “Pump it Up!!!” I know that man hair was super duper matted after this. “Pump it Up” is straight from Hades like literally I’m convinced satan manufactures it. Try a light pomade instead but he looks AMAZEBALLS.

Its an interesting sponge that has cute results. However i don’t think Youseff invented it. It was already a product called Nudred. I would recommend everyone wanting to buy the the sponge buy from Nudred and support black businesses.

Has anyone ever tried it on medium length hair?

It doesn’t work on longer hair..from what i tried

I saw something very similar to this a few years ago but instead it was used on short hair to start locks.

This isn’t new lol Black women have always been using this for as long as I remember. I think they sell it at most beauty supply stores

This concept is not new, sorry…people were doing this with a bare hand or a damp washcloth back when I went natural in the mid-90s. The style was called popcorn curls. So no, I haven’t tried this sponge…I can’t help but think that it would rob the hair of moisture especially given how vigorously you have to use it to get the desired result.

Is this new? I don’t think so. This is what my loctician used to lock my hair way back in 2008.

Didn’t they have something like this from a few years back..I forgot what they called it, but it was the exact same concept: a sponge with holes and you rub it on the hair to form tiny coils and such. I do like that the CurlSponge as the easy handle (I don’t recall the others having that).

LOL, I just spent the last 20 minutes going thru Youseff the Barber’s and the Curl Sponges’ IG pages, something about a man with a fresh cut! Oh, and the curl sponge is cool too! LOL

The boys at my school use this sponge all the time

I wish that I knew about this when I had a TWA.

Yes!! That’s what it was, the Nudred, same very thing minis the handle

Whoa! That is so cool! When I was in South Africa the boys did this to their hair…that was back in 09, glad to see it made it’s way here!

I tried this, not this sponge specifically, and I discovered that the really fine hairs were pulled out into the sponge. Did it once and never again…
Hence why you only see guys doing it…they don’t care about length! LOL

I recently cut my hair into a tapered TWA. I use a curl sponge (from Ebay) to style my hair. I love it.

More like the easiest way for hair to lock and get split ends. No thanks.