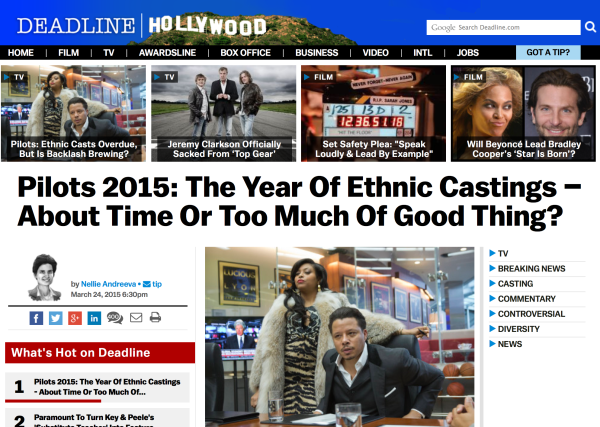 We wish this Deadline article was an elaborate joke, or something out of the Onion, but unfortunately TV writer Nellie Andreeva is dead serious about her premise that TV is too diverse, blacks don’t deserve any more representation and the whole thing is unfair to white actors!

Here are some of the “gems” from the piece:

But, as is the case with any sea change, the pendulum might have swung a bit too far in the opposite direction. Instead of opening the field for actors of any race to compete for any role in a color-blind manner, there has been a significant number of parts designated as ethnic this year, making them off-limits for Caucasian actors, some agents signal. Many pilot characters this year were listed as open to all ethnicities, but when reps would call to inquire about an actor submission, they frequently have been told that only non-Caucasian actors would be considered. “Basically 50% of the roles in a pilot have to be ethnic, and the mandate goes all the way down to guest parts,” one talent representative said.

In one instance, after a number of actors of different ethnicities tested for two roles in a pilot this year, two Caucasian actors ended up being the top choices for the two remaining regular parts. However, because of a mandate from the studio and network, one of the roles had to diverse, so the pilot could only cast one of the top choices and pass on the other to fulfill the ethnic quota. “They need to say the best man or woman wins,” one rep suggested.

How is this a problem when black actors have been shut out and underrepresented in film and TV opportunities for decades? Friends, Frasier, Cheers, Sex and the City all centered around white characters. And don’t even THINK about bringing up the Cosby Show as the saving grace of diversity…

Spoke too soon. Cause then Andreeva says this:

Television has been successful with shows that had both all-white (Friends, Seinfeld) and all-black (The Cosby Show) casts on the strength of their premise, execution and talent performances and chemistry.

Oh no, girl. That’s 2:1. The fact that Andreeva lists 2 all-white shows to 1 all-black show should be telling enough. This is some old “separate but equal” crap. Maybe this writer lives in a homogenous world that doesn’t see color?

And then the icing on the cake:

While they are among the most voracious and loyal TV viewers, African-Americans still represent only 13% of the U.S. population. They were grossly underserved, but now, with shows as Empire, Black-ish, Scandal and HTGAWM on broadcast, Tyler Perry’s fare on OWN and Mara Brock Akil’s series on BET, they have scripted choices, so the growth in that fraction of the TV audience might have reached its peak.

So what you’re saying is: “Ethnic diversity is overkill because now you have BET, Tyler Perry and Empire all of which surely serve all of your diverse non-monolithic views as a people” ? “Peak?” Yes, we have Cookie Lyon and Olivia Pope; but white audiences are allowed an unlimited array of complex characters.

In a recent study conducted by UCLA, it was reported that diverse casting delivers *Gasp* higher ratings.   Cable television shows with a median of 31 to 40 % minorities earned the highest ratings of all. The lowest ratings went to networks that cast 10% or less minorities. So maybe… just maybe the networks know what they’re doing this time around by implementing some form of diversity into their shows via mandate or other action.

If producing content which reflects the multifaceted U.S. population also yields higher ratings, what is the problem?

Oh Boo Frickin- hooo Other ethnic groups have figured out that if you have a good show that they will pick you up. It’s not about whitey anymore.

Yes! How about #keepwhitefolksguessing2015
What will we change next? Lol

As much as I like being représented on TV, I do believe “blacks” and “latinos” as a minority are over représented in comparison with other minorities. I’d like to see more native-indiens (in rôles other than being native indian or a werewolf), indian, chinese, coréan, gays, lesbians, disabled, unattractive people, fat people etc. But as a Black-French I can tell you, you are very lucky in United States. In France, we have very few représentation in tv shows, movies or even médias (journalists, tv anchors etc). This very week there was a controversial article about how stéréotyped are casting offers… Read more »

Why is it that every time people of color begin to get a little representation, white people start talking about “quotas,” “mandates,” or “reverse discrimination?” I’m so over this. Smh.

1. Maybe these shows are just more interesting. Highlighting diversity gives the public a chance to see unique stories and perspectives. Maybe white life, while continually validated as the norm, is kind of boring right now. Deal with it. Find better writers. 2. Funny how representation matters now that white people are apparently losing prime time success. No one cares about black directors or actors being nominated at award shows, securing promotional deals, topping the charts… The minute minorities succeed it’s like a hostile takeover and the tears start flowing about how hard white people have it. STOP. It’s not… Read more »

wow oh well… another day in the life of “white folks say the darndest things” oh and yeah #whitefolkssaythedarndestthings LOL!

And this is how you dismiss petty articles.

White supremacy at its finest

Funny how Scandal is considered a “black” show when of the main cast Oliva’s black and Huck’s Latino. Fitz, Mellie, Cyrus, all the rest of the Oliva’s staff — all white. So even one black person is one too many? Even on HTGAWM only half the leads are black.

Ugh! I need her to have several seats… SEVERAL!

When i learned a white friend of mine had never seen The Wiz i jumped at the chance to introduce it to him. A few minutes into the movie he ask “is there no white ppl in this whole movie.”
“No” i say.
“Isn’t that racist they didn’t hire any white actors” he replies.
“Have you never seen the wizard of OZ, there are only whites in that movie”
“really are you sure?” He ask completely dumfounded.
When whites are the majority they never see race but when they feel the tides shifting its time to sound the alarm.

First, someone should remind Nellie Andreeva that the white population is quickly becoming a major-minority, which means that very soon they will be outnumbered by “ethnic diversity,” which means the pendulum still has quite a ways to go before it truly represents the demographics of this country. Second, let’s do a little math: > Primetime runs from 8–10pm Monday through Friday. > If we count BET, TV One, and Centric (assuming they have original programming every night of the week just to be conservative), and add Scandal, How to Get Away with Murder, Empire, and Black-ish, there is a total… Read more »