Snail Slime Is a Dominican Secret for Hair Strength and Shine, Treating Acne and Scarring 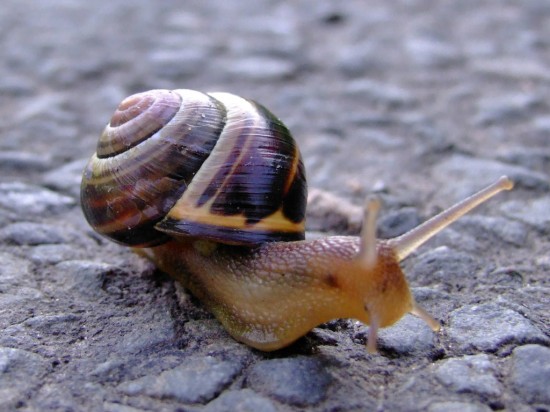 Nature is incredible, and it is fascinating to see how various cultures harness it for beauty and health. For decades Dominican women have used snail slime for everything from imparting strength and shine to hair, to treating acne, wrinkles and scarring.

NaturallyCurly.com has the details:

It is not the snail itself that has been the secret weapon for gorgeous hair but rather its enriching slime. Yes, the Dominican hair secret is none other than snail slime with its regenerative properties that are great for treating acne, fighting wrinkles, scar removal along while aiding irritations, burns, stretch marks, and healing wounds. The mucus that snails excrete is called Helix Aspersa Müller Glycoconjugates that is supposed to contain proteins, antioxidants and hyaluronic acid, which help to retain moisture in skin and hair. According to cosmetic chemist Randy Schueller, “Chemically speaking, snail slime is a complex mixture of proteoglycans, glycosaminoglycans, glycoprotein enzymes, hyaluronic acid, copper peptides, antimicrobial peptides and trace elements including copper, zinc, and iron.”

There has been a surge of snail slime in cosmetics and the substance even has an International Nomenclature of Cosmetic Ingredients code, which means it is registered on the international list of cosmetic ingredients as snail secretion filtrate (SSF). Snail slime is big business and there are even women getting snail facials where a therapist places snails on a client’s face and let the roam around the face freely. The snails leave behind a trail of mucus slime that is packed with glycolic acid and elastin, which also protects the snail from cuts, bacteria, and UV rays.

Incredible! When it comes to hair the snail slime is used in a variety of ways, including as a curl booster, detangler, sealant and glosser;

Snail slime is actually a blend of two types of mucus where one is more watery and acts like a lubricant while the other is more viscous and elastic. Together they behave like an adhesive. The second mucus acts as a natural gel and can aid individual curls fibers to meld together into more defined curls.

Go to NaturallyCurly.com to read more about this incredible ingredient.

Ladies, have you heard of this? Have you tried it?

This is why I prefer to make my own products. Are snails dying so that women can have glossy hair? Wouldn’t a decent and re-harvestable oil do the same thing? Not to mention that we’re talking about using excriment for beauty. Not that I’m totally against excriment because I do love honey, and only wish my excriment were so pleasant. I’m just wondering whether there’s any added value. Also, regarding antioxidants. Can someone please tell me what amount of antioxidants an average human should be consuming? Can someone tell me how to test for antioxidant levels in a person? This… Read more »

I don’t know about the Dominican Republic, but they don’t kill them in Asia. They collect the secretions. Also, the slime secretions aren’t their excrement.

the snails are kinda cute:)

Actually using snail slime is very popular in Asia. I’ve tried it due my interest in Asian beauty products and because Asia is years ahead if us in skin care. Overall I think its great acne and minor scaring but it all depends on the percent of snail slime.

Oh yeah, I once bought a jar of the stuff for my face, didn’t finish it. it ended up drying up. How long has this been used in the DR. if grandmothers have used it, then I’ll trust it more than if it’s a new trend.

i have not heard of this and i will not try it in this format – i will not put a snail on me. however if someone puts all that good stuff in a bottle or tube perhaps i might try.

Nop. as a Dominican woman borned, raised and still living in the Dominican Republic I can tell you that´s not true (the part of Dominicans using that). when it comes to snails, we don´t even like to see it, so you can imagine if we would put that in our faces. I¨m not saying that doesn´t work, I´m just saying that the Dominican part is NOT true.
Love you blog, BTW.

Snails are vectors for quite a few serious diseases. Y’all want liver flukes? This is definitely not a DIY sort of deal–please don’t go snail hunting for better hair, ladies.

This is hilarious, but I dont think i’d try any product with snail slime, nor would I let them crawl all over my face. Aloe vera gel is just as slimy and works well enough on my face and hair.

But… I did have a pet mystery snail in my fish tank, once. I think her name was Rachel and she passed after having 200 babies.

Unless those snails have the power of resurrection, to bring me back to life after I die of utter disgust, I will be passing on this.

Only thing those snail getting crome me is
SALT.

I’d rather stick to God given BLACK DON’T CRACK !!!

Cool beans. I like my products with these extracts. My skin has never been happier!

HELL to the NO !!! Just like SLUGS. Nasty slime-inators leaving gooey trails in the yard !!. BRING ME SOME SALT,NOWWWW !!

No thank you. I can’t stand snails! I got the itchies just looking at the snails crawling on her face.

I hear a lot about Dominican hair products. I would be interested to try except I haven’t seen any that are CG-friendly. I saw a Dominican brand in Sally’s the other day and it was full of silicones. My hair hates silicones. If anybody knows a brand without all that please let me know. thanks

I’d be damned I pay to have a damn snail, slug, whatever the hell slide across my face when I cAn go outside and get them for the free 99….well have my kids get em because I’m not going outside for em

Snail slime is actually traditionally used in East Asian countries. In fact, it is one of the ingredients used in Korean beauty products to treat skin discoloration, acne and moisture issues. They don’t kill the snails, though. There is a reason why Korean skin care is more than a decade more advanced than Western countries.

I think I prefer using products with snail slime than to experience snail crawling on my face. I don’t like it that something like snail is on my face leaving some mucus-like thing because that’s a bit yikes!!