History-Making Little League Player Mo’ne Davis Gets Her Own Disney Biopic , Bloomsburg U Athlete Has a Disgusting Response 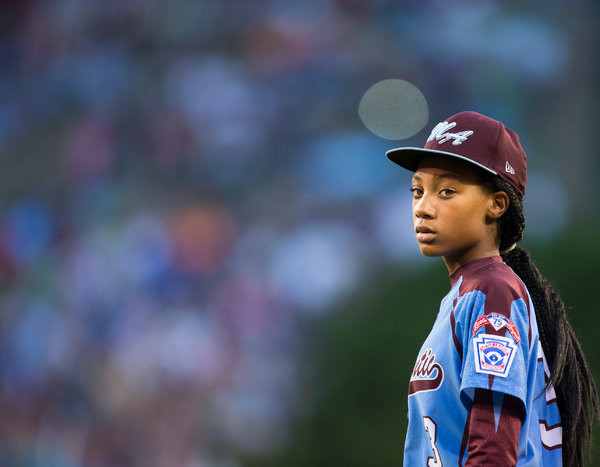 All-star athlete, Mo’ne Davis has been making all the right plays. It was recently announced that Disney will be making a bio-pic based on the 13-year-old. This is major! The upcoming biopic appropriately titled Throw Like Mo will follow Davis’ journey to become the first girl to pitch a shutout in the Little League World Series.

Named Sports Illustrated’s Sports Kid of the Year, Davis has proven herself to be a true class act by making sure the media doesn’t forget she puts teamwork front and center.

Unfortunately, with accolade comes a few rotten eggs who found the time to make it a point to tear down the triumphs of this amazing talent. , Joey Casselberry tweeted insensitive disgusting slurs after learning of the future film: 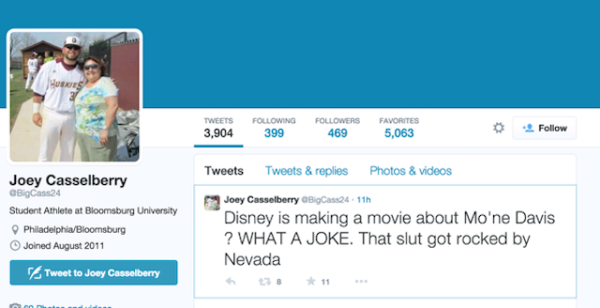 It was later announced by the official Bloomsburg University twitter account that Casselberry had been removed from the university baseball team.

We take matter very seriously; addressed the issue with the student-athlete (who has been dismissed from team), coach, and the team. — BU Huskies (@GoBUHuskies) March 21, 2015

Bloomsburg Univ is deeply saddened by what was written about #MoneDavis by one of our student-athletes. His words do not represent us. — BU Huskies (@GoBUHuskies) March 21, 2015

It’s amazing what happens when indignant clowns like Casselberry feel threatened by the fact that 13-year-old Davis can hold her own despite adversity. So here’s an open letter: Davis plays soccer, basketball and has proven herself to be a boss pitcher in the American past time of baseball. She was the first Little League baseball player to cover Sports Illustrated and the first black girl to play in the Little League World Series. So what you’re NOT going to do is denigrate and smear her talent, strength and character for the sake of your bruised ego. Open season on black girls is over. We will not let you tear her down.

Do your thing, Mo’ne! We got your back! 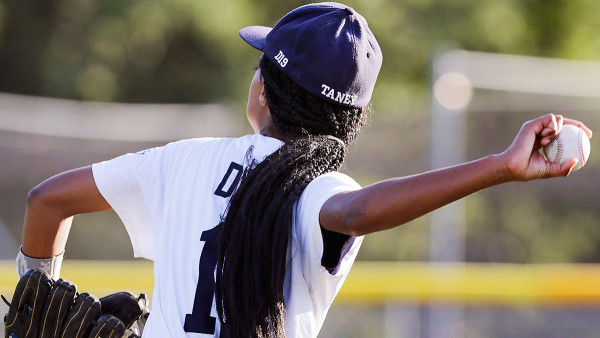 What do you think of Mo’Ne’s upcoming biopic?

Not surprising, yet nevertheless disgusting that a white male bigot refers to this ultra talented athletic child prodigy as a “slut”! SMH! Young black females have historically been referred to in sexually derogatory terms by the very group that raped and impregnated them for more than 300 years! I’m glad this turd and waste of life is kicked off the team and exposed to the scourge of public condemnation! I hope his racist remark was worth his career! AHAHAHAHHAHAHA!

Anytime a person feels the need to denigrate a child, you know that person has problems. Good for BU for taking him off the team.

I watched the LL series for the first time ever last year, and was so impressed by those kids. You go, Mo’ne!

I’m so proud of Mo’ne! Whatever we put our minds to, we can accomplish! Ignore the haters, ’cause they can’t stop us anyway. Let’s just support Mo’ne. I know she will continue to accomplish great things!

It’s a shame that there are Trolls everywhere you go. Just trying to turn something positive with black people into a negative. It’s a shame that when there is just slightest bit of positivity that people want to eclipse it with BS about “keeping us down”, or “It’s because of this”, Or even what this fool said. Seriously?! I mean can’t we just take a win as a win?! Congrats to this young lady and I hope that she uses this dudes ignorance as fuel and continues to do her in total light and positivity. She’s not alone in this… Read more »

Let’s stop calling them “insensitive” comments. This is incompetent commentary made by an incompetent person.

He really called a 13 year old a slut? Like, really?
That wasn’t ‘insensitive’. Pointing out that someone gained a little weight is insensitive.
What he said was disgusting, tasteless, and deplorable.
If it were up to me, he would have been expelled too.

What a weak, pathetic man he must be to resort to insulting a female in such a way, let alone a kid. Disgusting.

What a disgusting man.

When grown men use these type of offensive language to taunt and brand women with, it is disgusting enough, but to use language like this to label a child takes it to a level that makes him appear to be lower than a turd. He is a walking waste product and I hope his career in sport is over. Only the KKK or the police force will take him on now.

why in the world would this male call a 13 year old girl a “slut”.…where is his claim to fame?.…jealous much?
All around athlete making a name for herself on her own merit…you go girl! She is definitely a young role model for other girls to look up to. Praying for you Mo’Ne keep doing your best.