Editor’s Note: My White Boyfriend Changed My View on My Kinky ‘Kitchen’ 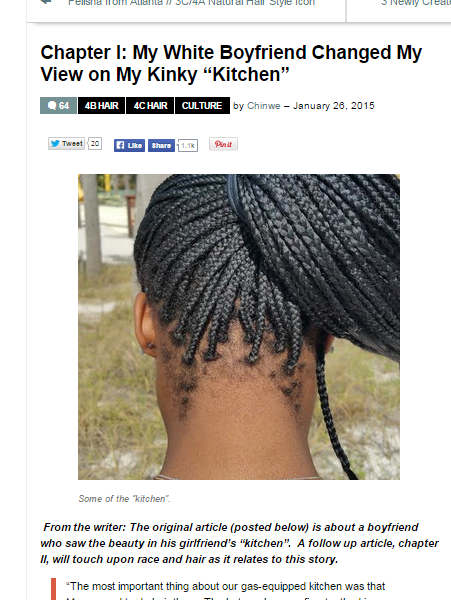 Recently our contributor Chinwe wrote an article about how her boyfriend changed her perspective on her kinky ‘kitchen’. Since the piece was posted it has ignited fierce debate here and on many hair forums. The main point of contention is the inclusion of the word ‘white’ in the title of the piece. Many people feel that the term ‘white boyfriend’ was included as clickbait. As the person who edited the piece, I wanted to give perspective.

1. The piece was pitched as ‘my white boyfriend changed my view on my kinky kitchen.’
2. I requested that white be taken out of the title, and that the article simply lay out what exactly the boyfriend did/said to encourage appreciation/love of the kinky kitchen. *However* I also requested that a photo of the couple be included so that the interracial nature of the relationship was referenced. Note: I DID FEEL THAT THE BOYFRIEND’S WHITENESS WAS RELEVANT TO THE PIECE. Simply because I have literally never heard a black person (male or female) refer to the kitchen as “cute”, so I felt that his ‘outside of the black experience’ POV was interesting.
3. When the article was delivered for publishing it did not include the requested photo. We had one hour till publishing, so I re-inserted ‘white’ into the title so that his cultural background was referenced.

So if there is anyone to ‘blame’ for putting ‘white’ in the title, it is me.

A few other things to know:

1. In May 2013 we published a piece by our contributor Christina about her boyfriend — who is black — and his support of her career as a natural hair blogger. You can check that article out here.

2. In December 2014, we did a story on the Instagram account Fros and Beaus, which features natural women and the men who love them. A clear majority of couples featured on the account are black, and the accompanying photos we ran for the piece were of black couples. You can check that story out here.

3. The BGLH contributor’s team is diverse. Some of us are married to/dating black men and some of us are married to/dating white men. Also, we do not share the same view on how non-blacks fit into natural hair culture. You can read two opposing takes on that — from writers Christina and Jc — here and here. BGLH remains an open space to debate and discuss these issues.

I hope this offers clarity.

you should have waited for the picture before hitting publish.
I’m black — I never referred to my nape as a kitchen and had no feelings about it.

Yeah, ‘the kitchen’ was a new term for me too.

I think we have a “generational divide” here. I am in my sixties and I believe that most Black women in the US around my age and older remember the term “kitchen” for the hair at the nape of the neck. I don’t know the origin of the term but I suspect it might have to do with all the “burning” that took place in that area. Visits to the beauty parlor were supplemented by our mothers pressing our hair at home with hot combs. The short hairs at the nape were hard to press without inflicting occasional burns on… Read more »

I’m British and learned (from a US program aired over here some years ago) that the term ‘Kitchen’ describes the likeness of the rolled balls of hair back there resembling peas. Hence the connection to peas from the kitchen. Odd I know but there it is. I’ve never liked the term, just like I can’t stand people referring to items/things/anything — especially hair as a ‘hot mess’ .. it just makes me think they’re saying ‘sh*t’ in a roundabout way and irks me. Hope that helps.

His race should be irrelevant. Period.

No need for photos and what not.

Black women, learn to accept and validate yourselves first. Until you do, you will always, on some level or another, seek the approval of others and they will never live up to your expectations! Why? Because they’re human!

So love yourselves! Embrace your hair texture and enjoy your shrinkage! You should be able to stand on your own two feel as an individual — your partner is there to compliment you, not complete you.

I agree with you that we should love ourselves but understand that after having a lifetime of society telling you the things about you arent beautiful you may feel some kind of way. I know as black women we are supposed to be strong but honestly it seems like what is perceived as strength is really a sort of cold bitterness built up from defending ourselves from a world that doesn’t accept us. Question: when was the last time you saw someones ‘kitchen’ (<– thats a new term to me) and thought they were beautiful little curls and not naps?… Read more »

love your response. the kitchen is an american term. I wonder who coined the term
http://www.coilsandglory.com

I love y’all bglh but y’all need to just take an L for this one and fall back. All these part 20 articles are unnecessary. (Heavily reminds me of a certain YouTuber who tried to force everyone to understand why she relaxed her hair an accept her bullshit excuse but no shade lol). Y’all made a mistake. The end. Learn the lesson and move on. Why force the rest of the internet to understand your views as a collective staff? As it pertains to the original article, the point was made clear past the title. It was an article about… Read more »

Thank you. This subject didn’t need three explanations. The original article has valid critiques. Accept them and grow as a writer/editor/website,

When somebody loves you, they love everything about you. From the mole on your face to your dirty draws. How can yal be salty at her for her WHITE man helping to embrace something that she wasn’t crazy about before JUST because he’s white? I’M the most pro Black militant person you can ever meet but i gotta admit that yal sound like some straight up haters. THIS IS PETTY! did yal want her to say she needed to get a perm or something? SMH tripping for NO REASON

Chile please, it was obvious clickbait and it worked.

I hope those people annoyed about the article weren’t the same people who didn’t care about the white chick on curly Nikki.

You guys can’t just let this story die, can you?

Please let this topic die a natural death without having it resurrected it every couple of days! It has already been beaten to death. May it finally rest in peace

Not being ignorant of many of the abuses of one ethnic group against another throughout history or blind to the inequities that still exist today, neither do I hold unforgiveness against any one person or people group for any wrong that was done by them in the past. Nor do I blame, hold guilty, or penalize any person or people group currently living through my words, acts, assumptions, or attitudes for anything their ancestors did, especially if they themselves are not currently doing it generally and are not doing it to me personally. Until a person gives me reason to… Read more »

Can we please get back to some style icons, product reviews, DIYs, and other things actually relevant to black girls with/without/wishing for long hair? Or, maybe I just don’t have a good understanding of what the point of this site is. My sincere apologies if I misunderstood.

I still don’t understand the hooplah and hyper sensitivity. This is coming from someone who cries for just about everything, by the way. Anyway, I’ll be glad when this goes away. It’s getting sad on all sides. :/

No need to explain to me, Sis! I wasn’t the least bit offended and I don’t think anyone else should have been. I understood POV.

Thank you, on the original piece I offered somewhat of a dissenting cmnt but this was well appreciated.

“Simply because I have literally never heard a black person (male or female) refer to the kitchen as “cute”, so I felt that his ‘outside of the black experience’ POV was interesting.”—Lol I said something along the lines of I find it hard to believe that a Black man never once said he liked her natural hair, but the quote about the kitchen, specifically, is spot on.

Too bad hater types are always indulged with an apology to reward their closed minded bullshit. It’s sick. To my way of thinking, this article reads, “Dear Sharks, I am so sorry you found blood in the water and proceeded to eat the wounded. Of course, your natural hair sister cannot make a full recovery, but we sincerely apologize for the mess you had to clean up on our behalf.”