New Trend? Women BURNING Their Ends to Get Rid of Split Ends 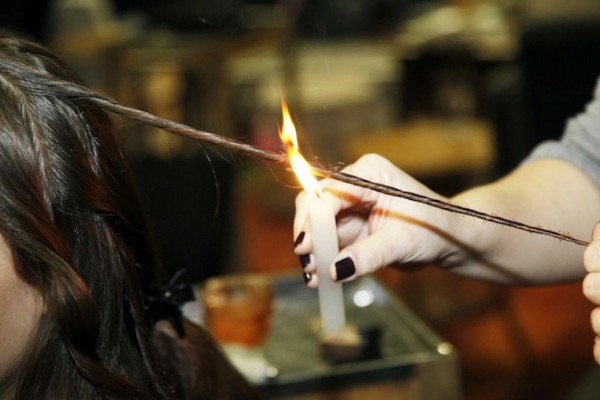 DISCLAIMER: This material is presented for educational purposes only. Neither I nor Blackgirllonghair.com encourages the use of this technique at home.

So just when I thought hair care couldn’t get any more extreme, I stumbled upon an article about burning away split ends with fire. Yes, you read that correctly – burning away split ends. From my research, I learned that this method of “cutting” has been practiced in various countries and for at least a century. For example, here is a video of barber Warren Lewis (in Memphis, Tennessee) cutting a customer’s hair with fire:

Nonetheless, this hair cutting technique is news to many people. In Brazil, the practice is called “velaterapia” and performed a little differently. I’ll talk more about this version of fire cutting today.

Velaterapia (candle therapy) – what is it?

Velaterapia roughly translates to “candle (vela) therapy (terapia)”, or what some call, candle cutting. Lace and Hair,  a salon that offers this special service in São Paulo, Brazil, defines it as:

“a process [by] where a flame cauterizes the hair, leaving behind a passage of nutrients to its interior; removes split ends and the impermeability of the hair caused by brushing and other chemicals.”

A section of dry hair is twisted until fly aways appear and then essentially run down with a flame.  (These burnt fly aways are then trimmed off with scissors.) This step is repeated section by section until the whole head of hair is completed. Ending with a deep conditioning treatment, the entire process can take two hours and cost around $200 at some salons. On the Lace and Hair site, it is said that this service is for those with “hair that need[s] a deep repairing process,” but many women are also using it as a way to remove split ends without loosing length.   Think of it as a speedy search & destroy, but with a flame of course.

When I used to get braid extensions installed as a child, a lighter or other source of flame was regularly used to burn the ends and sometimes flyaways. (Perhaps this brings back memories for many of you as well.) However, the aim was to seal the ends of the extensions and melt away any strays of the extension hair; it was not to burn my real hair.

In reading about a flame being brought to someone’s real hair, I could not accept the definition of candle therapy as a healthy process “leaving behind a passage of nutrients to its interior.” What is this “passage”? Burnt off segments of the cuticle layer that leave parts of the cortex – the “interior” – exposed? Is that a good thing? Nonetheless, the general consensus from those who have had it done professionally has been largely positive. Many women rave that this candle therapy leaves their hair feeling “healthy” and “smooth.” Here is a Cameroonian woman with relaxed hair sharing her experience with burning her hair in a very similar fashion. (The video is in French but the process is visual):

While I do think this is a pretty interesting technique to rid the hair of split ends, at the same time, I am concerned about invisible damage that may be done to the remaining hair and in the long term.  For now, I’m not sold on the method.

Would you try this “candle therapy”? Do you think it will catch on in the natural hair community?

I’d be waaaaaaaay too afraid to set my hair on fire honestly.
let me just stay old school with my good ol’ trimestrial trims…

Would I try this?

i’ll stick to the scissors.

This is a bit extreme. I am glad i’ve never been the kind to jump on bandwagons.

Interesting! Though I do feel like the “opening” is just the burning off of hair. Kind of similar to heat training,maybe

I too am not sold. Interesting though but not for me.

Interesting.…I will gladly stick to scissors, conventional condition methods and a blow dryer. No potential 3rd degree burns for me.

Oooooorrrrr you can just get some damn scissors. Its not that serious. Smh

Only one thing comes to mind: Michael Jackson and that Pepsi commercial castasrophe. I AM ALL SET!

I’d only try this under 3 circumstances:

1) It prevents all future split ends from forming at the fire-treated portion.
2) It is scientifically proven to help hair more than it weakens it.
3) This is done in an alternate universe in which I am not totally terrified of an open flame being that close to my face.

Uh how about that heat damage tho. If thats the case then my hair has been saved by heat damage already…nah, i’ll stick to the good to shears/scissors way of cutting hair. Heat on my hair terrifies me let alone putting a flame to my head…willingly. No thanks.

Well guess what my next microscope experiment is going to be!

Instead of using scissors,he literally burned that old mans hair down to nothing! Seriously?

Why would ANYBODY do this?

People just do too much sometimes.

We are all speaking on how we would not do this, but the proof is in the pudding. Look at the women’s hair who have used this process religiously.… and the Cameroonian woman- RELAXED AND SHE BURNS!! But from the little bit of hair I could see, its thick/dense, APL, bit of shine.… “looks” healthy to me.…

Maybe there is something to it because if it was completely bad it would not have been around for so long.

.…‘Would you try this “candle therapy”? Do you think it will catch on in the natural hair community?’.…

Some naturals will do EVEREYTHING for long hair. It would not surprise me if this is the new “bandwagon” for 2015.

When I used to get my nails done (acrylics), I used to go to a place that is in the Washington Hilton on 16th Street between K and L in DC and the guys in there, they were I believe Italian would do “fire cuts.” That is how they would “cut.” I was told it gave the hair body and the who’s who of the Washington political scene and broadcast news anchors would get their hair done this way. I’m not sure if they are still around but here is a link to YouTube video of him doing it http://www.youtube.com/watch?v=KjGNoplSGPY

There’s nothing more scary than the smell of burning hair

I would absolutely try it. I don’t follow trends but would do this if I find a professional in the technique.

In the words of the great Martin Payne: “DAMN THAT, Gina!”

I’ve known this method for a long time, some beauty salons do it in my country(Haiti); but usually they do it for flyaways so that when you do a bun or small braids there are no hair sticking out and it does work for flyaways.