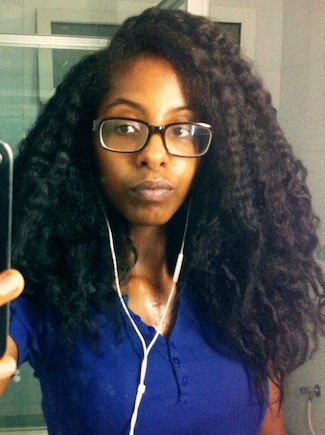 Introduce yourself!
S: My name is Sara. As for where I’m from, that’s a much more difficult question. I’ll try to resist the urge to ramble, so in a nutshell, I’m a first generation Sudanese-American third culture kid who grew up on three continents, currently based in Khartoum, Sudan. 🙂

Why did you make the decision to go natural?
S: I was natural until the age of 20, when I decided that I had had enough of wearing box braids and wanted to try wearing my hair loose. I had never been able to because my hair was extremely thick and easily matted. So in a bout of collegiate rebellion, I chemically straightened my hair using the thermal reconditioning system.

The first 6 months my hair was unbelievable – shiny, manageable, and bone straight; I could hop in and out of the shower and not have to worry. At 6 months, it started to fall out. I stopped chemically straightening my after that, and spent the next year and a half losing the majority of my hair. I was just shy of turning 23 years old, trying to resist the inevitable (and the consistent look of disappointment from my mother who had spent the majority of my life taking care of my hair just so I could destroy it), I went to a natural hair salon and cut my hair from hip length to barely touching my collarbone. Basically, I’ve been re-natural for the past 6 years.

How would you describe your texture?
S: I’m not an expert at the numbering system, in fact I find it confusing, but if I were to guess I would say about a 3c with the “tangle-bility” of Christmas lights, lol. When I was younger, my hair was extremely dense, somewhat coarse, and would tangle even while it was being detangled. Now it is a lot finer, and a lot thinner overall. I thought that on the bright side, at least that would mean fewer tangles…nope. Still a tangle champ.

Describe your styling regimen over the course of the month.
S: My hair is very temperamental, and tends to change its mind about what styles/regimens work for it, almost on a monthly basis. Besides that, I find that I’m pretty lazy when it comes to hair maintenance. I’m not good at sticking to a regimen, particularly if it has a lot of steps/requires a lot of time (e.g. only finger detangling – tried it, hated it, failed at it. Any tips on how curly girls keep their hair detangled just by finger detangling?). So, I usually go for twists (thus coming back full circle to non-loose hair). I wash and twist my hair once a week. I know that a lot of girls can make their twists last for 2–3 weeks, but for some reason that has never worked for me. Within the first 3 days they become fuzzy, particularly at the front, but that might have to do with my severe Hand in Hair Syndrome. I usually undo the twists a day or two before washday and keep my hair in a bun during those days. In Khartoum, people aren’t used to girls having big (they would call it “wild and unkempt”) hair, so it’s almost impossible to wear a twist out or a wash and go. 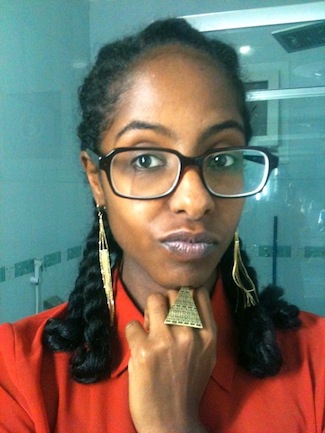 I’m also really limited in the types of products I can use because very little (read: none) is available here. Whenever I go back stateside I stock up, usually buying Cantu’s Shea Butter Coconut Curling Cream (a little goes a long way, and it works great to hydrate my easily dried-out hair). But for the most part, I make do with things I can find here. My go-to products these days are a homemade butter made from beeswax and assorted oils (which acts as both deep conditioner and twisting product), and most recently homemade whipped shea butter.

What does wash day look like for you?
S: Well, first there’s a lot of crying. I’m joking. Not really (I dread wash days). As I mentioned before, I untwist my hair a couple days before wash day and wear it in a bun, which helps to stretch it out a little more in an effort to minimize tangling. I then detangle, and wash. Again, none of the amazing natural hair products available in the States can be found here, so I have to make do with “regular” shampoos and conditioners, which strip my hair. I then deep condition with either beeswax butter or a Greek yoghurt, honey, egg yolk, and oil mix. For a while, I used to do henna treatments every other week, but my schedule has since become quite hectic, so I haven’t been doing much of those lately. Anyhoo, I usually deep condition for about 45 minutes to an hour (depending on how much time I have). I prefer to wash my hair at night, so after that’s done, I section off my hair and detangle, applying a little whipped shea butter to each large section, then twist/braid the sections and let them air dry overnight.

Describe your favorite go-to hairstyle for days when you don’t have a lot of time to style.
S: Well, my hair is in twists for most of the year, so it’s kind of like style once and then don’t worry about it for a week. The other advantage of twists is that you have the flexibility to wear them up or down or be creative. I’m not at that level of awesomeness yet, but I’m working on it!

How do you combat shrinkage?
S: My hair shrinks massively (from just above waist length to armpit length), and I used to hate it, but I’ve lately become more accepting of shrinkage. But yea, buns. Buns are the way to go. A 2 or 3‑day old bun will usually knock out most of the shrinkage.

What are some of your problem areas (if any) that require special care and attention?
S: My crown! And my ends! My crown is extremely dry, and so far nothing has helped cure this problem, although the whipped shea butter seems to be having an effect, so we’ll see. As for my ends, I have a serious fairy knot issue, probably because I’m always fiddling with the ends of my twists and tying them in knots (I know, I’m a terrible person).

What are 2 do’s for your texture?
S: Consistent detangling and Consistent moisturizing.

Is there a blog/webpage where we can find you?
S: Yes! My blog – Blog #45 http://alucan.wordpress.com — where I talk about amongst other things, the struggle of trying to consolidate two (or more) cultures into one life. I have been writing one post (titled Larry, Moe, and the Death of Curly) about the irony of how unacceptable curly/natural (non-straight) hair is in Sudanese society, despite the fact that most Sudanese people have curly hair. It’s proving to be a much bigger (and more emotional) challenge than I anticipated, but it’s almost done!

Just another lover of natural hair and expression. - Style Icon Coordinator for BGLH

So beautiful and her twist look so shiny and perfect. lol I love your introduction. Go Third Culture kids!

Haha the tangle ability of Christmas lights? I can relate! Love her hair. It looks very healthy, full and I like that she presented the good and the bad for her hair type.

She’s pretty and so is her hair 🙂

You have beautiful hair and will definitely try the oil, egg yolk, honey mix for a deep treatment. Thanks!!

Hi Brittany, the deep conditioner also requires either Greek Yogurt or Mayonnaise or Beeswax butter AND the oil, egg yolk and honey.

you are a beauty! love your hair! it’s always amazing to learn of different cultures that face such criticism when it comes to curly hair.

Whoa, showstopper! You’re my newest inspiration, girl; I love that you returned to your roots and relearned to love your hair! Good for documenting it too. Gorgeous, luscious hair and wonderful homemade routine.

Probably one of my favorite interviews on this site!

Your blog is so funny 🙂

“I’m not an expert at the numbering system, in fact I find it confusing, but if I were to guess I would say about a 3c with the “tangle-bility” of Christmas lights, lol. When I was younger, my hair was extremely dense, somewhat coarse, and would tangle even while it was being detangled. Now it is a lot finer, and a lot thinner overall. I thought that on the bright side, at least that would mean fewer tangles…nope. Still a tangle champ.” this is SO my hair situation. especially about my hair texture changing over time. everyone gives me a… Read more »

Beautiful! I have heard that twists are one of the best protective styles to encourage growth and it looks like you have proven that. Thanks for sharing.

My girlfriend is living in a village/town about 40 minutes outside of Khartoum and can’t find shea butter anywhere. If you buy it in the city can you post where you find it so I can let her know?

Hey, sorry I got it as a gift from someone who brought it from Burkina Faso. They don’t sell it in Khartoum 🙁

Hey, several independent retailers sell Shea butter and other products like Biotin etc. in Khartoum. This lady called Jamal Karma is one of them, she has a Facebook page. https://www.facebook.com/groups/jamal.sudani/
Your girlfriend can place orders with her on her Khartoum number 0911936720

You and your hair are absolutely lovely

Finally a fellow Sudanese in the natural hair community! Do you go to U of K, btw? I remember seeing you on a Humans of Khartoum post one time. I know how as an Afro-Arab culture we are so obsessed with relaxers and straighteners, so I applaud you for going re-natural and your hair looks gorgeous!
Quick question, did your mother ever use karkar paste (?????/???) on your hair? I know it’s an ancient Sudanese beauty secret, but I’ve never gotten courageous enough to try it because of the ingredients :/

Yaaaay! Thank you for being one of 5 of us in the community! lol. I could hug you right now. No, I’m waaay too old to go to U of K (we won’t say HOW old, lol), but yes I was on Humans of Khartoum! 😀 Thank you so much for the support — it’s tough out here in these streets! The looks I get, *especially* when I wear my hair out, are soul-crushing. Also, people keep confusing twists with locs… I don’t know, we have a long way to go. No, my mom never used karkar on me — we both… Read more »

Yay so glad you replied! No way! You could seriously pass for 19 haha mashallah. I don’t want to gross everyone out but karkar is heavenly compared to what people use out here in the Gulf (I live in Qatar). I’m sure you’ve heard of the camel urine and lice trends that have even spread to Sudan! Gross!
Anywho, it’s great seeing a fellow Sudanese on here and glad there’s more! Hope to see many more on here in the future! I wish we could team up and do something to change the situation in Sudan!

I just gained massive respect for you after watching this video 🙂 You da best!

Can’t believe i found this !! i can totally relate. I’ve started wearing protective styles just recently and everyone is giving me the stink eye for it.So i’m stuck wearing a scarf the whole day when i’m out and about. Basically i’m having the same problem of not finding the right products. Everything i’ve used so far is too greasy and quite useless in keeping my hair hydrated.It still dries, and frizzes pretty quickly. I hate that all pharmacies in Khartoum only sell products specifically targeted for softer hair. and lets not even mention how they fail to provide make up… Read more »