Inspiration: 12-Year-Old Cuts Off 10 Inches of Natural Hair for Locks of Love 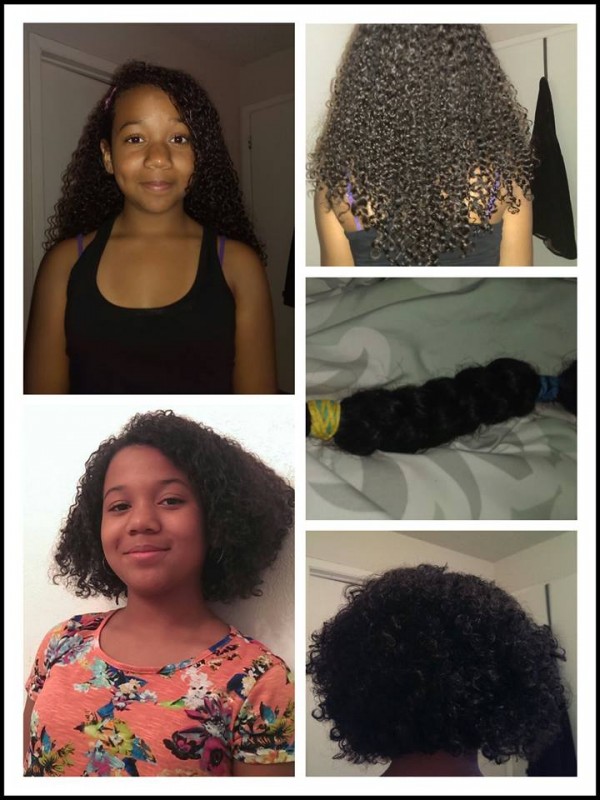 A main focus of this site (and the natural hair community at large) is achieving hair length goals. This goal is significant because it disproves the long-held belief that kinky/curly hair is incapable of retaining length. But the pursuit of length sometimes turns into length attachment, causing naturals to feel all their beauty and worth is tied up in their long hair. This is why 12-year-old Destanee’s story is significant. Last month she cut off 10 inches of hair and donated it to Locks of Love. We asked her and her mother a few questions to get to to the heart of why she made this decision. 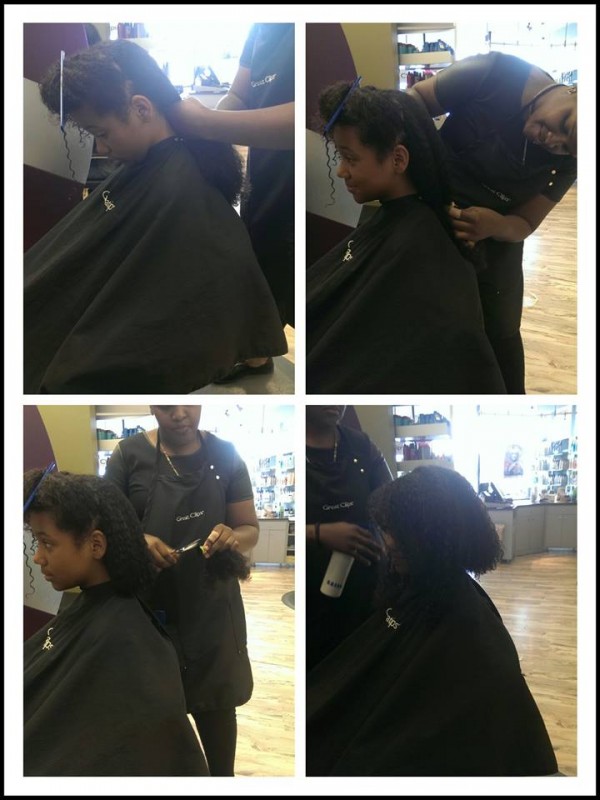 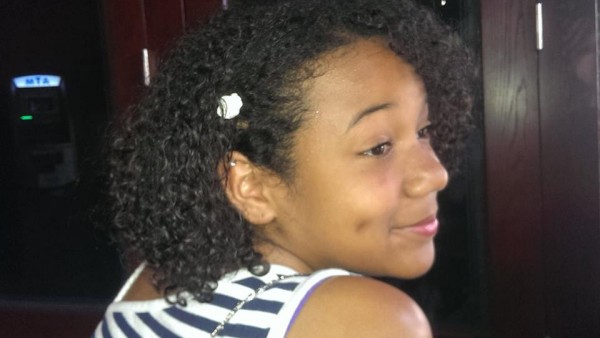 Many women are afraid to let go of their hair. What gave you the courage to let it go?
D: I was not scared of cutting my hair because I thought donating it would be for a good cause.

Cutting hair is almost a cardinal sin in many black families, especially for young girls. What was running through your mind when your daughter said she wanted to cut her hair?
M: Destanee had been asking her dad and I if she could cut her hair for a number of weeks before we agreed to let her. She has been taking care of her own hair for a while so she wanted something easier to manage for the summer. We discussed the pros and cons with her and her rebuttal was that she had been wearing her hair in a very similar style for a number of years. On the morning of her haircut, she decided to cut it short enough to be able to donate it. People have asked me how I felt when she said she wanted to cut her hair off. My answer to that is hair grows back.

We often tell our black daughters that their beauty is tied up in their hair. What do you think of this mindset?
M: People say her hair is so beautiful. Her hair is beautiful but Destanee is beautiful with or without her hair being long. If something were to happen to cause her hair to fall out, would she be any less beautiful? I have tried to instill in all my children that how you look doesn’t make you as beautiful as having a beautiful spirit. 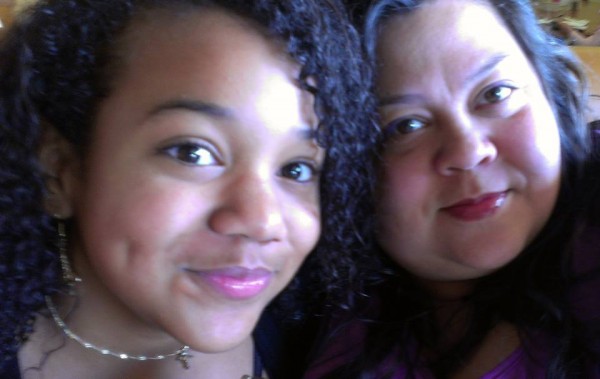 Destanee has shown me that she understands this by having a servant heart and doing the best she can. Des is a straight A student who actually skipped a grade this past school year. She also serves at church in the Early Elementary and Preschool areas. Des does the best to set a good example for her peers and for younger children even if it is not the “cool” thing to do.

Wow. Remarkable! Ladies, what do you think of Destanee’s story.

That’s whats up! You’re beautiful inside and out!

That was an amazing gift you gave someone. Good job! You are an inspiration.

That is so great, and I was pleased to read that Destanee’s parents supported their daughter’s decision to cut her hair. Destanee seems to be a bright girl, and she seems to not be attached to the length of her hair, and has learned that her self worth and beauty are not tied to her hair or its length. If only other parents would be supportive of their daughter’s (and son’s) decisions about their hair! I think that a lot of African American parents would be against their daughter’s decision to cut her hair, simply because of what you stated… Read more »

I love this story so much! Destanee obviously gets her beauty, good looks & beautiful spirit, from her mom. Love the values she’s instilling in her & how she is teaching her to have a heart of compassion for others. So often I get caught up in having long hair that I can obsess over it & think that trumps healthy hair at whatever length, or that is exceeds who I am within. This story is such a great lesson for me! Well done, mom & Destabee 🙂

While this young lady did a wonderful thing I want to urge people to do your research. Locks of Love is not what it’s cracked up to be. They are not a not for profit organization that makes wigs for cancer patients. If you have short term hair loss (I.e. a kid going through chemo odds are you are not eligible for one of their wigs) moreover the hair that that they don’t THROW AWAY they SELL. Look it up. LOL SELLS their hair! They have 6 million dollars worth of unaccounted for hair. Shameful. I say all this to… Read more »

Mai
Reply to  The lovely one

Adding on to this: they also don’t take kinky hair. My friend wanted to donate to them and she contacted them before cutting her hair. She explained her hair texture — very thick, Afro (no curls) textured hair — and the rep’s response was pretty much it’s hard for us to use that type of hair and people don’t want wigs with that hair.

So think about that also if your thinking of donating your hair to them.

good point, glad you brought that up…we need our OWN LOCKS of love

Mandy
Reply to  The lovely one

I agree completely. My 6‑year-old just decided to donate her hair and I knew I didn’t want to donate it to Locks of Love. There are a handful of other organizations out there: Wigs For Kids, Wigs 4 Kids, Children With Hair Loss, Pantene Beautiful Lengths. In the end, we went with Children With Hair Loss. They don’t charge anyone for their wigs and clients don’t have to just be cancer patients. Their website was very clear on these points and despite how small they are, they made just as many wigs in one year as Locks of Love. I… Read more »

K
Reply to  The lovely one

THIS! For those who don’t know LOL “lost” 6.6 MILLION dollars worth of donated hair and their CEO claims that they have never inventoried donations so can’t give news media an estimate to how much they have ever collected. They were also reported to have made only 300 or so hair pieces in 2011, claiming there wasn’t a demand for more. Those on long hair forums such as LHC and LHCF have talked about LOL controversies extensively for a few years. What this young girl did was very sweet but I urge others NOT to donate to LOL, do your own… Read more »

This needs to be repeated:
“Destanee is beautiful with or without her hair being long. If something were to happen to cause her hair to fall out, would she be any less beautiful? I have tried to instill in all my children that how you look doesn’t make you as beautiful as having a beautiful spirit.”

Thanks for giving some much needed perspective, mama! You’re doing a great job. 🙂

What a beautiful girl, inside and out! <3

Loved this story! Thank you for sharing it.

I think its awesome that at her young age, not only is she thinking of others already but she is not overly attached to “long length” and perfectly ok with cutting and donating some. Its an attitude that many adults struggle with. You can let go of hair and grow it back!

actually, looking at the photos, I think the cut suits her face better than the long hair did anyway. Go girl!

She has her mum’s eyes. BEAUTIFUL 🙂

this is cool. i thought about donating my hair once it got longer and then i found out that you cant donate colored treated hair. :/

What a great story, and thanks to everybody that commented about locks of love. Who knew? Like I always say: Research! But she did a beautiful thing anyway.

There is another place called Beautiful Lengths that you can donate.

Very inspirational, I love that she donated her hair for a good cause!

That’s awesome… What a beautiful young lady, inside and out! I wish I had been that that selfLESS instead of selfISH at 12.

Now…going to Google Locks of Love!

Praise the Lord for her substance and character! She has blessed so many by her action, the blessing will come back to her.

I know grown women who are afraid to go get an inch and a half of dead ends chopped off in fear of sacrificing length. Good for her for giving 10 healthy inches for charity!!

This little girl is only 12… it’ll grow back.

Woops, what I was trying to say was. “Many grown women lived their whole childhood w/ short hair so you can’t blame them for wanting to enjoy long hair when they’re adults. This little girl is only 12… it’ll grow back.” I copy and pasted this, Idk only the last part showed up.

It? would be a shame if you did not lose weight when these people accomplish it easily:

Truly inspirational story, giving to others and being selfless and she is beautiful either way!:)?