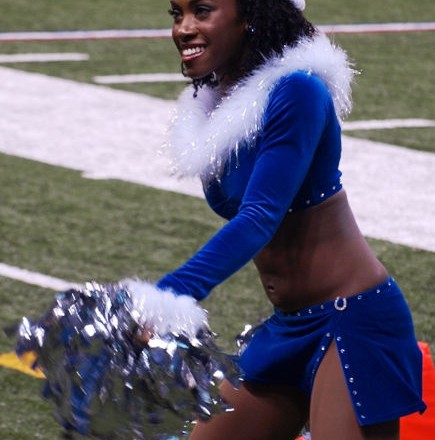 Hi! My name is Danetha and I was a cheerleader for the Indianapolis Colts for two seasons. This year, I am auditioning for the San Francisco 49ers Cheerleading squad…as a natural.

My hair journey, like many of my naturalista sistas, is deeply personally. I got my first relaxer at the age of 6. My hair was relatively healthy until the latter part of high school. One day, it just fell out! I had areas that were noticeably bald and had to wear a wig. But, that didn’t stop me from getting a relaxer. I felt that I would not look pretty with my natural hair and more importantly, I had no clue how to take care of it. I had been told my whole life that my hair was rough and needed chemicals in order for it to be presentable.

Fastforward a couple of years, I decided to audition for the Indianapolis Colts cheerleading squad. My hair was relatively healthy, but would not grow past my ears. I made the team and worked with one of the team’s stylists to determine my look. We decided that a long, straight weave would be best. I LOVED it. Finally, I had hair I could whip around and felt sexy when I performed on the field in front of thousands of fans. However while wearing the weave, I continued to get relaxers and my hair continued to shed and break. I was embarrassed to let anyone see my real hair and would never admit that I wore a weave.

My decision to go natural was a compilation of my traumatic experiences as well as seeing other women rock their natural hair. They were confident, beautiful and free…and I wanted that too! I was tired of depending on a stylist to take care of my hair, tired of hiding behind this fake security blanket aka my weave, tired of wasting 5 hours in the salon and tired of scheduling vacations and everything else around my hair schedule. Enough was enough. During my final season as cheerleader, I began my hair transition. I got my last relaxer in 2008 or 2009 and transitioned while wearing a weave. I cut off my relaxed ends at the end of 2009 and started 2010 with my natural hair. It was so liberating and I watched every Youtube video to learn new styles, conditioning techniques and to find a supportive community. 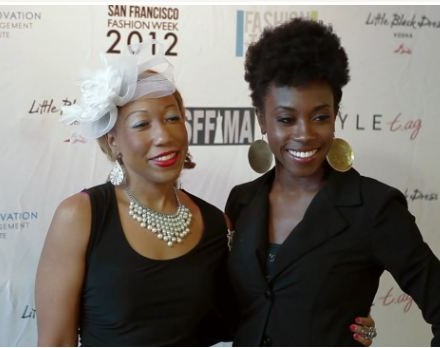 Danetha as a natural

I moved to California to pursue professional opportunities and start my own accounting business. I’ve always wanted to get back to performing and this year I am auditioning for the San Francisco 49ers cheer squad. Although I am completely comfortable with my hair, up until about a month ago I was still considering wearing a weave or doing a keratin treatment for auditions. Something, anything, that would allow my hair to hang so I could whip it around when I dance. But, I would be reverting back to my old self again. The girl that hid behind her fake hair because she thought no one would accept or like her true self. This isn’t to say that I am opposed to weaves, relaxers, keratin treatments, etc. But, it wouldn’t feel right to me. I want to prove to myself that I my natural look is as good as any other look. There aren’t a lot of us naturalistas at auditions and it would mean the world to me to have your support while I prepare and go through the audition process. You can follow my journey-from determining the best hair style to workout tips to choosing my audition outfit(s)-through my various social media links below.

In a world of Basketball Wives and “The Game”, you rarely see natural hair represented in the arena of professional sports (except for male players who wear their hair big and curly/have locs). It would be refreshing to see some natural beauty represented! Ladies, what are your thoughts?

What an amazing story! I am rooting for you and I salute you for being a pioneer. If you don’t pave the way, who else will. Good luck!!!

Great story! As her hair gets longer she will be able to whip that hair around in no time, a fierce fluffy twist out would look awesome on the 50 yard line! She could also transition to sisterlocs and whip those around 🙂

I was truly touched by this story! Natural women often don’t have positive representation in the media, and I salute Danetha for taking this enormous pioneering step and BGLH for telling us about it 🙂

I love this. Last year I auditioned for the Panthers squad while wearing a wig (see photo), even though my natural hair is beautiful (and people tell me so all the time). I somehow felt that bouncy and straighter hair would “fit” with what they were looking for; and any scan of their past squad photos pretty much confirmed that. It just goes to show that the psychological influences of our beauty culture can still be at play even long after someone has gone natural and embraced their new look.

i liked this interview.

good luck to her too.

All I have to say is ’ Do that thang’! Lol
I am so proud that you realized that your natural hair, the real you is better than anything else. I’ve always been one that doesn’t believe in conformity.…..always be you. Who wants to look like or be like anyone else?! Good luck with your auditions and I wish you the absolute best!

Random side note: I wish I was a good enough dancer to cheer professionally!!! That is awesome Danetha 😉

You look beautiful! Best of luck!

i wish you the best with your auditions. 🙂

Best of luck to you Danetha! Way to represent yourself, I’m sure you’ll do great!

How timely!! I’m preparing to audition for the Jets and momentarily considered auditioning natural myself. Despite *love* for my natural 4c kinks (and how beautifully it’s been growing since my big chop!), when I take a look at their current roster of cheerleaders it’s like Stepford Wives in that piece–all long, with the Kim K waves. I don’t think I’m bold enough to rock my hair for the audition, which I hate to admit, so I salute you sis!!

that’s why pioneers like danetha are important. if she starts doing it successfully maybe others will follow and maybe you will too!

CONGRATULATIONS! DANETHA AND GOOD LUCK ON YOUR NATURAL JOURNEY. YOU’RE LOOKING GREAT WITH YOUR HAIR AND I HOPE YOU GET OUT THERE AND WHIP THAT HAIR AROUND!

She is cute, beautiful smile!

I wish you the best!

Good luck Danetha! I actually just completed 3 consecutive seasons as a Kansas City Chiefs Cheerleader and my rookie year (2010), I was natural! I wore my hair in a straw set. They LOVED it and I knew how to WERK those hair whips better than the long blondes on my team. 😉 Do what makes you stand out and be true to yourself!! Unfortunately (but fortunately), I ended my last two years being a Chiefs Cheerleader wearing braids, but it looked very “natural”. This style was a lot more protective on my hair than the wear and tear of… Read more »