The Story of My Second Big Chop 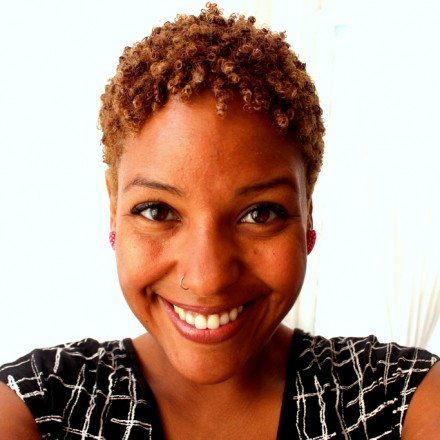 By Cassidy of The Natural Selection

Like many women who decide to go natural, I was terrified of doing my big chop.  For years, I had rocked my long straight hair with Aaliyah-swoop bangs and had become very attached to the feeling of my ponytail swooshing against my back.  Not only had my long hair become a keystone to my identity, but also a symbol my femininity.

The Big Chop, I knew, would threaten both of those things.  So I did what any normal gal would do: I avoided it!  I transitioned in braids for over a year so that when I finally DID do the chop, I emerged with about 6” of hair on my head.  From that point on, I was focused on growing my hair long, on achieving a glorious halo of BIG HAIR DON’T CARE. 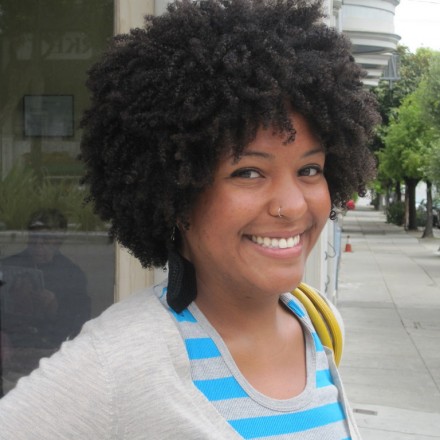 Fast-forward two years: my coils when stretched reached far past my shoulders and I was well on my way to the fro of my dreams!  However, after an incident at a Dominican Salon, I had to cut 10” off the back of my hair.  It was a very sad moment, but it was this experience that opened my eyes to the extreme value I have always placed on the length of my hair.

After receiving a jazzy little haircut from my stylist, Marie of Madusalon in San Francisco, I found myself having a lot more FUN with my hair instead of harboring this preoccupation of growing it.  Inspired, I decided to run a series on my blog called “Chop Chop!” that shared the stories of naturalistas who had gone for a 2nd chop.  I admired these women, who included Celebrity Stylist Felicia Leatherwood, Koils By Nature Owner Pamela Jenkins and model Tomiko Fraser Hines, for going through the whole ordeal again and envied their smooth, closely cropped hairstyles.

As I adventured through a variety of hairstyles including one that incorporated half of my head shaved into a quarter inch fade, I always thought about how I wanted to really go for the 2nd chop myself.  I was torn because at events and on my blog people were always complimenting me on my great curls while I secretly wanted to just shave them off!  I realized that in a way, people had more of an attachment to my hair than I did myself.

I was scared to do a 2nd chop.  I mean, I’m a natural hair blogger: it’s my job to have hair, right?!  But I couldn’t get clippers off my mind.  A few weeks ago, I finally worked up the courage and sat in my stylist’s chair while watching my curls fall to the floor.  As I watched the clippers glide all around my head, I watched as a new face emerged, one that wasn’t hidden beneath products, styles, extensions or long curls hanging beneath my shoulders.  The face I saw was mine like I had never seen it before. 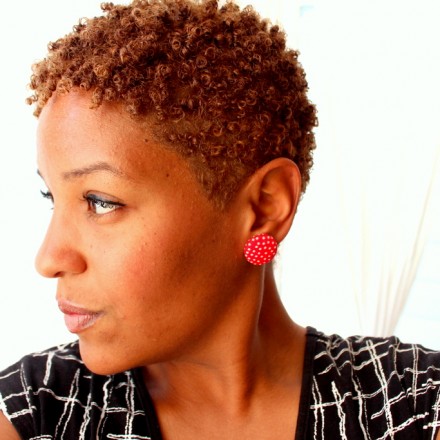 The process of going through a 2nd chop has provided me with an opportunity to realign my appearance with my TRUE identity, one where long hair doesn’t equate femininity, I don’t have to hide behind the distraction of my cascade of coily coils, and hair isn’t the be all-end all of life, even as a hair blogger.

Cassidy is creator and author of The Natural Selection.

This is so inspiring! Thank you for sharing your experience…I was thinking about big chopping for the second time too, this article cleared my doubts!

Her hair is very pretty whether short or long :). Just curious is there another link because the above is not working for the site to visit her page?

Here it works better when I do it as this it came up now ~ http://naturalselectionblog.com/

Cassidy, girl, you are tempting me. The short ‘do, the color, your fresh curls—hold me back!

I totally understand. I’ve never had the experience of a big chop and I’m really feeling the itch.

I think the Big Chop was the most liberating experience I’ve ever had. Even though I had transitioned my natural hair out by 6 inches, I got bold in that salon chair and asked her.to take it all off. Being the first time I had ever cut my then long hair, I felt so free. And did my head feel light!
Everytime I see a TWA now, I fight the urge to BC again. Sometimes you do feel pressure to keep your ringlets for others. I Mini-Chop like every summer just cuz I can’t seem to fight thel urge though lol.

WOW!!! You are truely an inspiration to me. I have been natural for about 1 year now and i have the urge to chop my hair off again. I have heat damage around the boarder of my head.….and im ready for a new start. I never truely enjoyed my short hair because of what others thought around me. After reading this .….…my big chop #2 is coming soon 🙂

I am definitely going to chop mines,too much split ends and plus I have parts that’s too short so here go the chop „,

What lovely little coils! And I really liked this story because I too did a “second big chop”. My first one was with no knowledge about “going natural”, and just not wanting to have to go to the hairdresser when I was in college. The second was several months after getting my hair flat ironed/blow-dried/hot-combed to absolute death and suffering a lot of breakage and other heat damage. I was sad to cut off so much because I liked the length, but I never wore it out because it was damaged. It was a nice thing though because I liked… Read more »

I did my second big chop 11/15/2012. its the best thing I ever did. my hair was breaking badly , now its in itts best health ever. I went from barely neck length to shoulder length in 3 months. So if you are thinking about a second big chop do it. and you have a chance to have two naturalversaries! 🙂

So happy for you girl,you rock the look and the confidence!

Congrats!!! I jus did mine about 2 weeks ago..initially I was hesitant because between eczema and relaxers the hair at my temples had receded a bit so I was scared of how it wud look. However I’ve been gettin a lot of compliments. Its a liberating feelin for me…remembering India arie’s song..:)

Unfortunately my second chop came soon after my first BC, due to the fact that I (with my lazy self) blow-dried my hair then pressed the next day … for obvious reasons my coils rebelled and broke off so I ended up with 2–3 inches of new growth instead of the original 5. If it has to be done, it has to be done; no matter how painful.
[img]https://bglh-marketplace.com/wp-content/uploads/2013/02/20130220-NewStyleforFriday22K.jpg[/img]

I had a horrible experience at a Dominican hair salon, as well. My hair wasn’t yet as long as yours but it was pretty thick and healthy. I regret going to the salon because after I washed out my hair, it fell out in patches and I had bald spots. It took almost 1 year for my hair to grow back to the length it was pre-Dominican salon. Now I’m working on retaining length and thickness. Wish me luck. You’ve inspired me. 🙂
[img]https://bglh-marketplace.com/wp-content/uploads/2013/02/Photo116.jpg[/img]

it’s tempting since I got soooo many splits and knots. Also short hair seems easier to manage.

This is truly inspiring. I as well did a 2nd big chop on 10/1/2012 and it was the one of best decisions I’ve ever made. My ends are sooo much healthier and thicker and my hair grew back to the length it was in just 3 months. (I’m currently collar bone length). It also gave me a 2nd chance to start fresh with a good regimen. When I did my 1st big chop (8/26/2011) I had absolutely no knowledge on being natural or how to properly take care of my hair, I just knew that I didn’t want to relax… Read more »

Thank you for this page. I had my big chop 1 week and 3 days ago. I am still getting used to it. There are days where I wish that it would just grow already! But this site has helped me to enjoy the journey as well. I love you! God bless! : )

I can’t help but wonder, if you’re getting to the stage where you are comfortable enough to completely chop your hair off a second time, isn’t it just becoming a new type of hairstyle for you that no longer holds the significance that first BC does? I shaved off all my hair a few years ago for a fundraiser and kept it less than a centimetre long for two years. After growing it for a year I ditched the fro and am back to a shaved noggin and loving it! I definitely wouldn’t say I consider what I do a… Read more »

I actually think she looks better with the short cut and color. It gives her more personality as far as appearance. It’s just super cute.

After reading what feels like a dozen post, blogs and everything under the sun… I did the big chop after 5 months of transitioning. I was a little unnerved as I watch my hair fall to the floor. I feel like a pluck chicken but a happy pluck chicken!! Now to figure out how to r

That should say how to rock it!! I’m hoping that’s the fun part!!

I, too, am considering a 2nd big chop. I have been natural for 5 years. This last year I’ve experienced major breakage, a bald spot, constant shedding, and a change in my hair’s texture. I am seeing a dermatologist next week and will more than likely 2BC afterwards. I don’t believe I have to “chop” so low, but with the sides and back at 4.5 in and the crown and front at 2.5 it kind of hard to style, any style, my hair.

Know this is an old post but I’m reading it at just the right time for me. I too had an “incident” at a Dominican salon and will have to chop off a lot of hard-earned hair to get rid of the damage. I cut a few inches of the worst of it myself and am already mourning the loss of length. Using this piece and others like it to help let go of that long hair obsession…

Thanks for this article! This is really what I needed to hear. I’m going to do a second big chop because of a BAD braiding experience but trying to see this as a new start and a way to have fun with my hair and not worry about thickness and length. I had really thick 4c hair that is still healthy from being handled roughly but my ends feel thinner than normal. Instead of nursing for length I’m just gonna start over! I’m defined but Big hair or length. Thanks again!