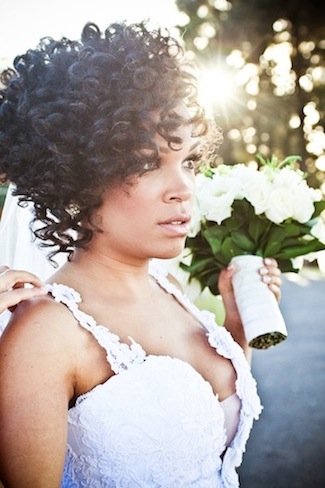 When did you and your husband meet?
P: I first saw Anderson in October, 2010. He is part of a local band and I happened to win tickets to go to one of their concerts. I saw him on stage and thought he was cool, knew how to get the crowd hyped, and just rapped quite well. But that was pretty much it. So, a few days after the concert I went on Facebook and tried to find him, which I did. But really I had nothing to say, didn’t really wanna sound like a groupie or anything lol. It wasn’t until Eric Benet released his “Lost In Time” CD that Anderson posted a status commenting on it… That was my opportunity to just go on and break the ice. We started talking and realized how much we had in common. However, I was really reluctant to just go on a date with him. I don’t know I figured he’d be this cocky rapper guy!

So, in March, 2011 his band was playing at a place close by my house and he invited me to go, which I did and took one of my girls with me. After the show, we met up with everybody by the bar and I was blown away! He was so polite to my girl and I and we spent about an hour together before they had to go. So we went home and that was pretty much it. I was kinda hoping for a “Hey, you wanna meet up tomorrow or something?”, but no. The next day I sent him a text asking if he had plans that night. Yup, I invited him on a date lol. Well it was amazing and ever since we just kept seeing each other almost every day. Then in September, 2011 we took a trip off to a beach and on our first morning there I woke up and he said he wanted to talk to me. He had a little black box in his hand and when he opened it there was a spool of thread inside. I was so confused that I didn’t even hear anything he said! Then he tied one of the ends to my ring finger and asked “Will you marry me?” and the ring came sliding towards my finger. I started squeaking and screaming YES! He told me he had seen this proposal on “Stepmom” with Julia Roberts and thought it would be perfect. He was right, sure caught me off guard. 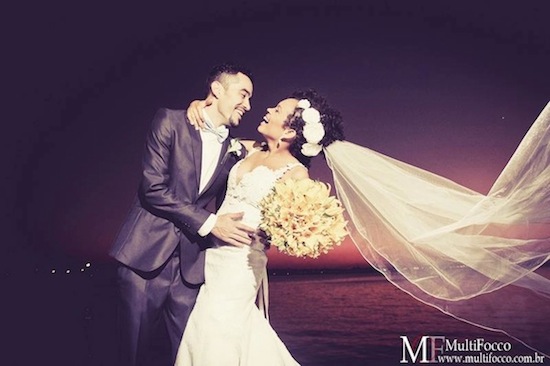 How was your big day?
P: I honestly wanted to get married ever since I was five when I first saw Ariel on Little Mermaid dressed in white, so you can imagine how much I wanted this day to go perfect. Well, our big day was MUCH more than what we had expected. We planned out every single detail and it just felt amazing to see everything come together. Love, dreams, family and friends, all at the same time. But as in almost every wedding, there was a little setback… My wedding was scheduled to start at 4 p.m. and when it was 3:40 p.m. I was getting ready to leave and Anderson called saying my Dad had forgot his collared shirt at home! Note that his house was 30 minutes away and they were getting dressed right next to our location. So, I arrived at 4:10 at our location and my Dad and Anderson didn’t arrive until 4:35 when my wedding planner came running to tell me we were starting because they had just arrived. I confess I’m always a drama queen, but I was just so happy and anxious that I told myself I wouldn’t let that get to me. We all laugh about how they ran into a mall and bought a new one.

So when it finally began we had a band play with violins and a keyboard all of our favorites during the ceremony, such as “If I ain’t got you” and “What you won’t do for love”. I walked down the aisle with my Dad to “ Close to you” by The Carpenters and it was just magical. As I walked up to Anderson he just burst into tears and so did I, which got a lot of our friends and family to do the same. After the ceremony we were introduced as Mr. and Mrs. Rodrigues and danced to “Rock with you” by Michael Jackson. Ahhh it was amazing, hands down the best day of my life. I wish that day would’ve never ended.

How did you wear your hair?
P: My hairdresser asked me to wash my hair in the morning and condition it as I usually would when I do a wash and go, and let it air dry before going over to her apartment. She used a curling iron to do a bit looser curls on my natural hair, and then took a bunch of bobby pins and started pushing up the curls towards the front. Pretty much that was it! Then she pinned the 3 silk flowers I had chosen for the wedding.

What was your process of deciding how to style you hair?
P: My hair style was a quest since day one! I knew I wanted to be ME and still look like I had been to a salon. Thing is 90% of hairdressers here just don’t know what to do with natural hair. They just suggest you straighten it and do something ordinary like a bun or whatever! So, when I finally found a woman who told me she could have me, be me, but just fancier, I knew she was the one. I wanted to have official portrait pictures taken a month before the wedding so I knew exactly what I’d look like because I knew I wanted to feel fab about my hair. Plus, as dumb as it may sound I wanted to prove to everybody that you can look spectacular in curls in any occasion. So, we did!

How did your family/husband/guests receive your hair at the wedding?
P: My husband and some family members were my main concern. My husband had joked that if I showed up not looking like myself he’d whistle and a boat would get him out through the lake, but he said he was stunned by how perfect and unique I looked. As for my family, a great part of them were never too supportive of the whole “afro” look, but when they saw me they all said I looked gorgeous! The lady who worked with the video company told me I looked stunning and so natural at the same time, so I guess that went as planned!

Is there a blog/webpage where we can find you?
P: On Instagram @Pollycol
Ah! You guys can take a peek at how the wedding was 🙂 The part where I speak in Portuguese I’m saying “Dude, my Dad forgot his shirt at home.” http://www.youtube.com/watch?v=TicQWJAzjrQ. And on this video it’s our save the date video done 6 months before the wedding, you can see how short my hair was! I had big chopped 4 months before they shot it! http://www.youtube.com/watch?v=xzS-DgGfO2Q.

Congrats on the marriage and loved your hair 🙂

Really pretty…. thanks for sharing!

Beautiful photos! You looked gorgeous and your hair was perfect!

I LOVE this!! Awesome photos, and their wedding seemed like so much fun!! 🙂

Thank you much!!! It was really fun!

Gorgeous bride!! I can feel the love flowing thru these shots, and you hair is AWESOME 🙂

Tried to reply every single comment, but this iPhone is acting funny. So, “Thank you girls!!!”

I have tears in my eyes…..
Beautiful

Beautiful!! You definitely have the glow! Love, Love, Love the hair!

I was smiling the entire time while reading your story and watching the videos. You two are such a lovely couple. Congrats! Your hair looked awesome too, gonna have to try that – a light curling iron on conditioned hair.

*Blown away!* Such wonderful energy on your wedding day! It really shines through your photos! Congrats on all your happiness!!!

I watched the wedding video. That wedding was one of the most beautiful and positive events that I have seen in a very long time. I could totally tell you are really and truly in love. Even made me believe again that love like this still exists 🙂 I wish you both all the best!

It does!!! Keep believing in love 😉

pretty bride and that hairstyle really was banging!

Beautiful bride! cute story and pics. Blessings to your and your family 🙂

watching the video i see that her hairdresser use a hot curling iron on her hair without flat ironing her hair first— wow! i am totally trying this technique. it never occurred to me to just curl.

Yup! She just asked me to wash it in the morning and let it air dry before going over to see her.

Gorgeous! I also really like that he took a page out of a romantic drama for his proposal haha.

Simply gorgeous she looked great. I’m getting married in October and i have NO idea what to do with my hair, the fiancé wants me to wear a fro and would hate it if I straightened, so I have been searching for inspiration online but can’t. Please beautiful curlies if you know links or have pictures please please help me out. I’m getting pressure from friends and family to straightened since I’m the only natural they know in their lives so they hate (sad I know) PS: is it me or does she look like Rihanna on that first profile… Read more »

Reneé, remember it’s your big day! Do whatever you feel like would look good on your hair. My entire family wanted me to straighten it, but I chose not to because it wouldn’t be me! As for my husband he said that if I showed up with my hair straight he’d whistle for a jet ski or something and leave lol. I feel like you gotta do what you and your husband would feel happy about 🙂

Love love love your hair and the video. It was so beautiful! I’m getting married in June and I’ve been driving myself crazy trying to figure how to wear my hair for my big day. you just gave me some inspiration.

So beautiful, and I’m happy you stayed true to yourself. I’m natural now, but my hair was straightened years ago when I married. However, my husband said the same thing, he didn’t want me at the alter all glammed out with heavy makeup. I think it’s lovely and refreshing that our men want us to be who we, the best versions of ourselves on that special day. Your photos are a true testament to the self love you have and how fortunate you are to have met and married a man who loves and respects you for it. Stay happy… Read more »

You are sooo beautiful! Your love is written all over your interview. CONGRATULATIONS

Congratulations!,I’m so happy for you! and i really love your gown and your hair looked so fancy and beautiful.

Oh my gosh! This is sooo beautiful 🙂 What a lovely wedding & such a beautiful bride and happy groom 😀