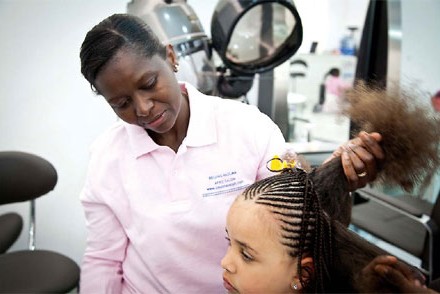 Who knew that a black hair salon could create a lot of buzz  — especially in a country where most of its patrons are not black.

Martha Makuena is credited for starting the first black hair care salon in Beijing, China, an East Asian country that she and Paul Luyeye migrated to from the Congo in 1999. Makuena has no regrets about moving to the country and has found ways to combat some of the challenges that presented themselves to her along the way. One of those challenges was the fact that she couldn’t find any place in Beijing where people were capable of styling her hair.

So, she started her salon and has been scoring big from non-black customers. In an interview with BBC, Makuena described how Asians come to her salon to pick up black hair-dos because of their uniqueness.

She says that these patrons come in and say, “I want to look cool so they come to braid their hair.”

Makuena who learned to speak Chinese fluently, has also had to overcome the stigma of her skin as a business owner, claiming that “language” is the most important aspect about doing business in China and setting residents at ease about her work.

“People when they look at Africans they think about bad things,” Makuena said. They think that some Africans set up shop, come for a second, and disappear, taking advantage of China’s economy for a passing moment. However, her determination to create a business in the most unlikely of places has paid off for her. Her skin color no longer creates issues or resistance of customers.

“They don’t just see me as African, they see me as a person doing businesses.”

“They are respecting me and the way I am.”

Wow this is really awesome!

Well I went to Japan, and urban wear and hair styles was every where, so I’m not surprised.

“The First African Hair Salon” Yesss love it.. And I love she also does other races’ hair Africa represent!!!

They’re are many Africans in China because the two countries’ business relations.

OMG!! I’m Congolese!!! I’m extremely proud!!! all we get these days is bad press, an on going war and a terrible president. I’m gald that this lady is doing something big and almost legendary!!! The first black hairdressers in china!! Woow I couldn’t be even more inspired. Never give up a dream even if it arrived from necessity like the named women above. She had to go through a lot of barriers ( language, race etc) but she made it!!!! I’m sooo proud I want to cry!! I don’t even know her. Congo stand up!!! What the heck.…ALL WOMEN STAND UP!! my Black ladies… Read more »

Great stuff I wish them prosperity and happiness. I will not lie, it can be hard to be black in China. I got less hostility but more wonder, I may have found it hard to have stayed for a long time but these people are doing well for themselves. It is nice that they are being embraced. China will become more multi-cultural as it is a growing economy so they should get more and more business. May I also say what smart children to know three languages. So many people have trouble learning even one additional language. I also know… Read more »

Amazing! To echo the other commenters, God bless their business for many years to come!

I love this! I have spent a lot of time in Asia and she is right. If you learn the language and work hard people will respect you. I wish I knew of her when I was there! God bless her and I hope her business prospers for infinity.

WOW!! Such should also be opened up here in Thailand.…my hair is thirsty for a professionals touch!!

If you’re only concerned with your hair looking good, this is the place to go. If you’re concerned about the health of your hair, I wouldn’t recommend it. I had my hair braided in an effort to save it from the harsh, dry air of Beijing, and ended up with bald spots from them pulling it so tightly. Secondly, when they can’t get the color right, they see no problem putting it in more than one time. The stylists don’t speak English, so the owner has to translate everything to them in French. Finally, the prices of hair products there… Read more »

Yea, when I looked at the video, the first thing I thought was that I wouldn’t let them do my hair. Not really concerned about the look nearly as much as I am about the health. Impossible concept for many stylists to comprehend. These styles make me think somebody is going to end up looking like Naomi Campbell. I hope your hair grows back.

This is good news for people close to Beijing. If you’re in/near Shanghai, there’s a black hair salon there called Studio Ebony: http://www.smartshanghai.com/articles/wellbeing/wellbeing-studio-ebony.

I’m closer to Shanghai than Beijing, so i may have to check this place out when I visit there. But do they pay attention to the health of the hair or are they just stylists? I had a nightmare situation with my last stylist (who worked at a natural hair salon in Atlanta), which is the reason why I haven’t set foot in any salon in three years. Therefore, I’m not overly excited about the idea of a Black salon here in China. I want to hear what other patrons think about it first.

I like reading stories like this. Very inspiring. Standing out is usually very difficult. But when you finally over come all odds you become a force to reckon with. I like how Mr. & Mrs. Makuena encouraged black hair dressing in a non-African world. Now even the non-Africans want to do African hair! Amazing! Go natural Africa hair!

This is great,i’m so happy for her!

Good for her! I love hearing stories like this. Wish I knew she existed when I was in Beijing this past summer. I would have loved to stopped by and got by braids touched up.

ARGH. it always bothersme when hairstylists own hair isnt styled or neat!
2) if they speak Chinese (whether mandarin or cantonese) why arent they in this interview
3) the customer isnt chinese.
4)is the population of afr descent ppl ( whether they be from africa or europe or carribbean) alot that their business will be successful ?

good luck to them.

1. Who cares as long as you get what you paid for. 2. The youngest child spoke in Chinese to her father about something her teacher said. 3. Again, who cares? Beijing is a huge city where many “foreigners” come and go from military families to students to business execs the same way they do in other countries. 4. Obviously it is and she stated that Chinese people also frequent her salon, mostly for braids or “black” hairstyles because they are different from the norm. Asians perm their hair to make it curly or even kinky textured because their hair is… Read more »

Anyway, they should branch out to other countries as well, if possible. Certainly in areas with foreign military bases. I always hear friends in the military talk about not being able to find someone to do their hair overseas so they braid or twist it and hope for the best. It’s amazing that they are able to pick up and move somewhere so different from what they’re used to AND learn to speak the language fluently. This was long overdue. They will have much success.

Very interesting! I love hearing the baby speak Chinese! My dad was stationed in Okinawa, Japan in the late nineties on Kadena Air Force base. My mom, brother and I lived there as well. My mom told me how infatuated the young Asian women were with black culture. When she would step off the base to go to their dance clubs. They would come up to my mom and admire her hair and profess their love for “hip hop”. Lol They loved the intricate updos. Black women, we’re trendsetters! Just for being our selves!

This is awesome. I’m so glad stuff like this is always popping up so exciting to see.

nice story but i travelled throughout asia and lived in japan 15 years ago and i dont believe this is the first salon in china that caters towards african american hair. i find that fact highly doubtful as many asia countries have sizeable expats from african nations and military from us and black professional. korea and japan for a fact has had african/ aa hair salons for decades as ive been to them. but regardless congratulations.

This is amazing!!! Im so happy I found this!!! I’ll be staying in China for a semester abroad and I was so worried that I wouldnt know how to do my hair!! Thank God!!!

I’m a Congolese natural teen who lives in the Middle East and spent some time living in South East Asia (Singapore specifically) and I know how hard it was (and still is) to find a reasonably priced and good black hair salon. I’m impressed thought that the little girls speak Chinese with their parents and not French — although I speak English better than French like them, it’s still impressive they’ve picked up a language so unlike their own! So proud to see African/Congolese/Black people being successful entrepreneurs!