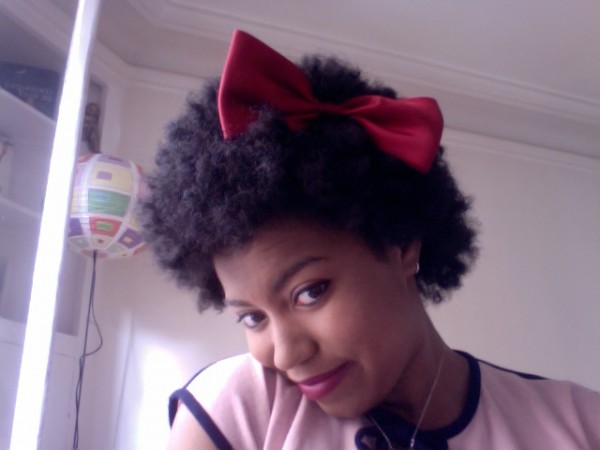 Introduce yourself!
S: Hi! I’m Shannon! Currently I live and study in Dallas, but I was born and raised in Houston. I’m a junior at SMU, and I also own an etsy store (http://www.etsy.com/shop/allheartalways) and do freelance writing on the side.

Why did you make the decision to go natural?
S: Well, during my freshman year of college I had a bit of an identity crisis. It was my first time being in a predominantly white school and I felt like I was losing grips with myself. I hated the idea of trying to fit in with someone else’s idea of beauty, so I went home that summer and told my mom I was shaving my head. It’s been 19 months and I think it was one of the healthiest decisions I’ve ever made.

When and how did you transition into natural hair?
S: I cut off all my hair in June of 2010. There was actually another customer in the salon that screamed when she saw what I was doing. It shocked everyone around me, but I felt very liberated by it.

In what ways (if any) has going natural affected you?
S: Going natural has affected everything. It’s affected the way people react towards me, and most of all it’s affected the way I see myself. I had the most frustration towards my hair when I was trapped in between the TWA and the full-fledged afro phase. I felt very self-conscious and tried to over compensate with overtly feminine clothes and bows. Now that I’m reigning in the fully glory of the fro I have more confidence than ever. It’s awesome to know that I can feel beautiful without having to chemically alter myself.

How would you describe your hair?
S: I have the kind of hair that makes hair dressers want to cry. It’s thick, unruly and vengeful. It has a mind of its own, and now that it’s natural it’s pretty much its own character. It’s also kinda a little pet of mine. Like a chia pet, you could say. When I take care of it, it rewards me by looking marvelous. And because of this I’m excited for it to keep growing…and growing…and growing.

What is your regimen?
S: My regimen is all over the place. As a poor, busy college student my hair is lucky to be washed once a week. It’s usually every two weeks. I’ve used a lot of different shampoos, but I make sure they are all sulfate free. Walmart has an okay line of hair products called Organix. I like the Cherry Blossom Ginseng, because it smells delicious. After washing and conditioning I use Kinky Curly Knot Today to detangle, then I usually do twists, wrap and rock head wraps for a couple of days. I also love Karen’s Body Beautiful. I use their Sweet Ambrosia Moisturizer and Body Butter. They make my hair swoon with joy. I also have this shea butter/olive oil/jojoba oil contraption that I invented. I use it to add sheen and lock in moisture.

Tell us about your hair color?
S: ‘The skunk stripe,’ as my mom calls it, was born out of boredom. I used some four dollar bleach blonde thing from Sally’s (which is ill advised—I know) and I immediately hated it. I’m in love with it now and I’m probably going to redo it soon. It’s grown out and faded a bit. The texture was different for a few months, and I made sure to use extra conditioner on that spot. It feels the same as the rest of my hair now.

What mistakes have you made with your hair that you’ve learned from?
S: The biggest mistake I’ve made is comparing my hair to others. In the beginning I spent too much time trying to morph my hair into something it isn’t. While regimes and tutorials are great, I learned that everyone’s hair is different and through trial and error you have to find out what works best for you and your curls.

What’s the best/most effective thing you do for your hair?
S: I have to always always always sleep with my hair wrapped. This is such a pain when I’m travelling with friends and they look at me as if I’m Ms. Cleo when I do up my night scarf. It pays off so much though. My hair is crunchy and angry if I leave it out when I sleep.

Anything else you want to add?
S: This has honestly been such an honor. And to anyone who is thinking about going natural or just starting the journey, don’t be discouraged by the first couple of months. Have patience and trust me, it will all pay off. Work the beautiful tresses you were born to wear!

LovE the pic of the baby taking a chunk out of your cheek:) Great hair, I like the skunk stripe

I think that pic is really adorable! Too cute!

very adorable girl with a lovely afro! thanks for sharing a little bit of your self with us.

Her style is so fierce! I love that satin-looking headband she’s wearing to the side with the tie/bow!! Looking greta girl! Did you make that hair accessory?

Yea!!!! That beautiful lady is my little sis. And that adorable baby is my son Jax! Shannon you have always stayed true to yourself. I love you so much lil sis.
-Jas

Shannon is a true Fashionista and a trend starter! I love the photo in the hot pants and Cheetah jacket. In addition to all her fashion creativity, Shannon is an incredible writer….Elanza (Mom)…

Shannon,
Natural is naturally YOU. I see your artistic creative side and I’m enjoying it. My favorite is when you rock the bold and classy bow. Can’t wait to read your writings…..Auntie Glen PS. Thanks for the hair tips!

I just tweeted you cuz i’m in Dallas too! You are so brave & beautiful to rock your natural at SMU! My bro goes there & loves it but I wouldn’t even consider it for college due to the lack of diversity there. But I love that you acknowledged that but didn’t let that stop you from being yourself. You are BEAUTIFUL, love your style! I’m off to check out your fashion diary now! 😉

I’m late to this post but LOVE, LOVE your look and your hair! Gosh what a smile too, you just light up the room, will be checking your blog!