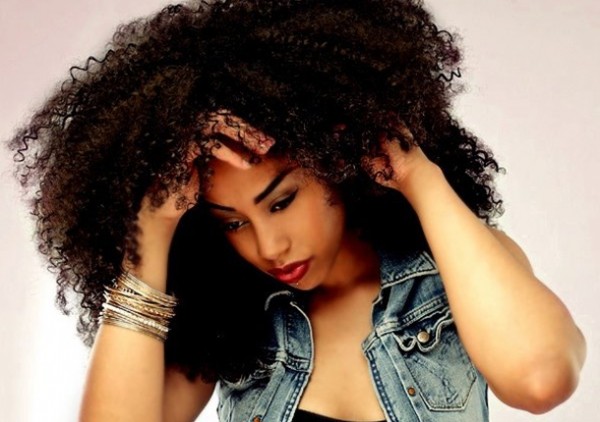 Prepared by Rinny for Blackgirllonghair.com

This year Blackgirllonghair.com will be partnering with Chicagodefender.com to provide in-depth interviews with entertainers who inspire us. We start with Rochelle Jordan, a Toronto native who is making a buzz on the music scene with the release of her eponymous album ROJO. With comparisons to Aaliyah, and rumors that Drake is a fan, Rochelle is definitely one to look out for. Check out our interview with the lovely songstress.

Introduce yourself
ROJO: 24, currently based in the T dot O! I am definitely pursing music 100% full time.. I am the definition of ‘independent artist’ so I got to make my money to support my music.. but even when working outside of my music, I’m still working on my music. lol

You have an amazing voice. Was singing always a passion of yours?
ROJO: Thank you so much! Singing has always been my passion.. never knew what I was supposed to do with it.. all I knew is that I couldn’t do without humming or harmonizing with artists I listened to as a kid. I remember singing at talent shows in elementary school. At The Terry Fox Run in grade 6, which we celebrated every year, my cousin and I performed ‘When you believe’ by Mariah and Whitney in the school assembly.. and we made a few teachers cry! lol I was like.. ‘What the hell are they crying about?’ lol I was told right after that performance that singing was what I was meant to do.

I noticed in a previous interview, you drew inspiration from R&B songstress, Amerie’s popular debut album “All I Have.” Around that time, there were many women with, “Why Don’t We Fall In Love” as their ring tone. Why does this particular album resonate the most with you?
ROJO: Man.. That was the female anthem for a while huh?! lol I can’t pin point the exact reason why I connected so well to that girl.. Maybe there was a spiritual connect happening, God setting me up to study someone who would be the muse behind my sound.. who knows. All I know is that she is dope and that album is crazy. Ha!

If we were to take a look in your mp3 player right now, what songs would we find in constant rotation?
ROJO: Hmm right now… You’d find ‘Watch the Throne’ .. Drake’s ‘Take Care’.. A mix of old Neptune and Aaliyah joints and a whole bunch of unfinished songs by me that I’m working on !!!

Let’s talk about your album, “ROJO.” What is the main inspiration behind the album?
ROJO: I mean.. the inspiration behind Rojo really just comes from who I am as a person and an artist. everything I’ve been through, things I’ve seen in life. Amazing artists that I’ve been inspired by.. and just the Sound of music I’ve taken to. I just wanted to be as real as I could.. I don’t do this to impress anyone, I don’t do this to fit in. I don’t even do this to go against the grain of what’s happening in the industry right now just so I can say ‘I’m different’ .. Everything you’ve heard so far is coming from the deepest places in my soul. The realness.. the vibe.. thats where it all comes from.

What do you want your listeners to feel when they’re playing ROJO in their home or car?
ROJO: I want them to feel a connection. Music is just another form of human connection.. so it’s important that they are feeling what I’m saying..and how I’m saying it. I want them to feel the vibe, the chord progressions and the harmonies .. I want it to touch them the way they touch me. I dunno.. I just feel like we are missing a lot of Realness in music nowadays.. and we are responsible for the loss of it..and the regain of it. I feel responsible for trying to bring this feeling I once had back.

So far, you’ve been compared to some notable names such as the female version of Drake and the late Aaliyah. How do you feel about such comparisons?
ROJO: It’s great to be recognized as being great like these profound artists..but being compared.. to me is a little scary. I’m honoured.. but I just want to be myself you know. I don’t want to feel like I’m holding the torch for someone else, and then if I do something unlike the artist I’ve been compared to.. I disappoint. Dont get me wrong, when I heard my name next to Aaliyah, I was in shock and disbelief, someone like me could capture similar moments and feeling just as Aaliyah did? My Heart. But in the end I just want to be Rochelle.

Toronto, Canada has definitely made a name for itself in the R&B industry over the past year. Toronto-born, rapper Drake introduced the World to R&B artist, the Weekend early last year. Is there a particular network of artists within Toronto?
ROJO: Kind of.. and then sometimes no. lol In the west end a lot of musicians know each other.. people who grew up in the church especially. Drake grew up with his team who were well known in Toronto now and then. I was in the east end minding my own business while all of this was going on lol, I really didnt even get my start until I was 20 .. and even then I was back and forth from here to LA so no one really knew me as a ‘singer’ singer. As for The Weekend, I never knew who he was until he came out. But usually when there is a talent in Toronto, people know about it. I was just a little absent..but I’ve connected with Toronto’s up and comers now…so much talent.

I listened to your superb remix of Drake’s single, “Marvin’s Room.” Have you been able to reach out to Drake with your music?
ROJO: To be honest, I have no idea if Drake has heard my music. I’ve been told he has.. but who knows! haha

Do you have any plans to sign with a label or do you intend to pursue an indie career?
ROJO: Being independent is hard, as much as everyone can sit back and say ‘Stay independent’ A lot goes into that. I’ve been independent for 3 years now, so I know the ups and down of it. The amazing thing about it is that I have Full control over what I want to do and stay true.. but at what cost. $$$ and vice versa. But I mean.. when the right situation comes around.. I will take it by the horns no doubt. but until then.. Protostar and I will just continue creating the Vibe.

Now I just have to ask about your simply stunning hair. It’s beautiful. How do you maintain your tresses?
ROJO: Lol! oh lord.. the Rojo Fro!!! It is a lot of work, and I use a lot of products to keep it abnormally big and healthy. I don’t really take too much time out for it, the best thing to do with big curly kinky fros is just leave them the hell alone. Lol the more you try, the more you fail.

Do you have a hair routine you follow?
ROJO: I wake up.. it looks a hot mess, I spend five minutes putting a concoction (of olive oil and Kera Soft moisturizer, Mixed Chicks, and Ramoni moisturizing spray) in it.. then another 3 minutes with the iron pick combing through it, trying buff it up. I love my fro!!!

How can we find out more about Rochelle Jordan/ROJO?
ROJO: For any recent updates on my music or to download ROJO, please visit the Rojoproto.com site. you can find me on Facebook ..simply Rochelle Jordan.. and on Twitter @Rochelle_Jordan !!! FYI. ROJO II is well on its way! Thanks you for this wonderful interview.. Light and Love. 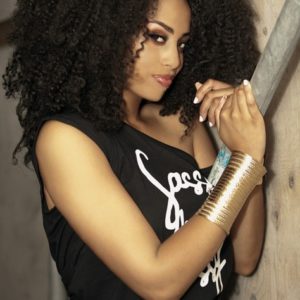 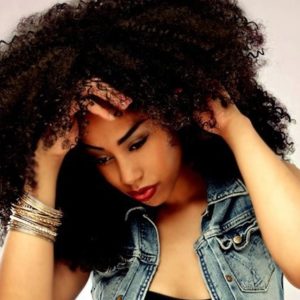 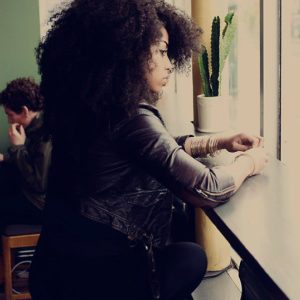 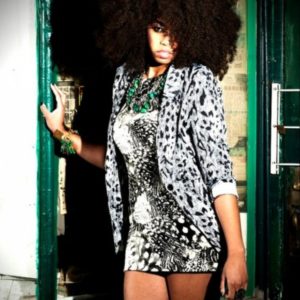 she’s gorgeous..love the hair…i’m gonna have to check out her work.

I absolutely love independent artists like Rochelle J and Jesse Boykins III. She is so right about the realness missing from music nowadays. I feel I find more a connection from non-mainstream and/or independent artists. There is originality, variety, and even a purity to this music. Just so refreshing. Keep doing what you do! And yes her hair is fierce!

I love Jesse Boykins too!!!

I’ve seen her pic before but never heard her music until now. LOVE IT!

My goodness her hair is gorgeous! Great hair and great music!

OMG I love ROJO’s music. I have her mixtape, its AMAZING… “feel the same way” and “Sleep” have been on repeat since I downloaded it. love, love love it! Oh yes her hair is GORG!

Hair like hers makes me glad mine isn’t thicker than it is. I mean WOW…she was rather oblique about her hair care but I can’t imagine that’s easy to take care of in any way. But whatever else she IS doing, it’s definitely working for her…

Obviously a lot more goes into taking care of that monstrous Fro. but I can tell she likes to focus on her music more than her look. ‘i am not my hair/look’ type of Chick. im diggin this girl.

Her songs are great! I love her voice, and her hair is amazing! I would love to have hair that thick.