When did you and your husband meet?
A: We met in Nigeria at an engagement dinner during the Christmas holiday season 2008, though he lived in London and I in the States. I actually had a terrible stomach bug and was not going to attend… I also wasn’t *TECHNICALLY* originally invited since it was a more small intimate setting (contrary to most other Nigerian wedding-related events) but my cousin (a close friend of the bride) was able to pull some strings. And I had previously met the bride a few times before this event through my cousin so I wasn’t a complete stranger. So that’s my disclaimer saying that I don’t necessarily endorse “crashing” engagement dinners to meet a man… it just happened that way! 🙂

When did you get married?
A: Husband and I had our “white wedding” ceremony in a suburb of Chicago in May. I say that because we also had our traditional wedding ceremony in Nigeria 6 months prior (which involves native attire, not the white– or in my case ivory- wedding dress).

How was your big day?
A: Ummmm… it was KINDA AMAZING!! It definitely had “yep knew something would go wrong” moments, including being in the wrong bridal suite and my bridesmaids getting into a near argument with an uncompromising mother [of another bride’s wedding bring held in the basement level reception hall of the country club] *rolls eyes*. Also, our wedding was meant to be outdoors at this beautiful gazebo by a pond with a fountain and all that pizzazz only to have had sudden rainfall and a severe temperature drop just 30 MINUTES before the ceremony…so had to move everything inside. The Windy City stays true to its reputation– AND it was SO gorgeous at the rehearsal the day before! Go figure. *rolls eyes again*. We still ended up taking pictures outside after the ceremony though. No regrets though, because in the end I married the most amazing man!!

How did you wear your hair?
A: I wore my hair in a Janelle Monae-like updo. I had gone through several debates in my head during the months leading up to the big day and consulted my sister, cousin and friends. Interestingly enough, my husband was TOTALLY averse to me having weave. So that option ended up flying out the window… though I really am not a weave person at all. Even the consideration of it had me panicked–to the point of almost going against his wishes. He was actually okay with me having a fro, but I knew I was up against mothers and aunties that would have staunchly opposed such things– at least for the wedding.

Also, I knew I didn’t want to get micro-braids and I DEFINITELY wasn’t creamy-cracking my hair. I was then referred to Aeleise of HairLoveArt (http://www.hairloveart.com/) by my friend Renisha of RenewedFitness (http://www.renewedfitness.org/) and QUICKLY scheduled a consultation and appointment with her for when I flew back to Chicago. I had also scoured the internet for natural hair styles that I might have been able to pull off and found a SWEET natural bridal style thanks to another friend of mine. Thus with Aeleise’s incredible expertise/finesse and inspiration from the picture, she was able to create a new, improved and FABULOUS version of the hairstyle.

How did your family/husband/guests receive your hair at the wedding?
A: Hahahahahaha! My family– well parents/in-laws/some older relatives–were mostly in shock… at first. I had to debut the ‘do the night before actually, since I had gotten the style done a couple days before the wedding. But once they saw the entire wedding look, they all definitely received it well! And other family that were our age-mates, friends and guests loved it. Most importantly, hubby REALLY loved it. 🙂

Is there a blog/webpage where we can find you?
A: I’m just a Tweeter of my random thoughts so https://twitter.com/#!/Ayodeli. But feel free to check out blog.alakija.com which is my husband’s blog 🙂

Also thanks SO much to Marc Climie for his amazing photography for our wedding (most of the photos shown here are his), and to Enimien Etomi Inegbedion, Ade Okelarin, Abi Yeni Rotimi (their image[s] also here) and the other awesome photographer friends/guests who attended and took images! ” 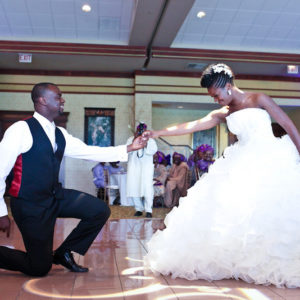 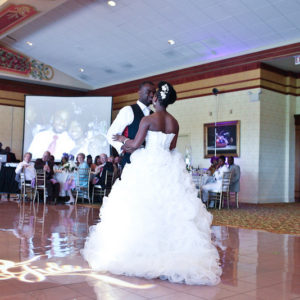 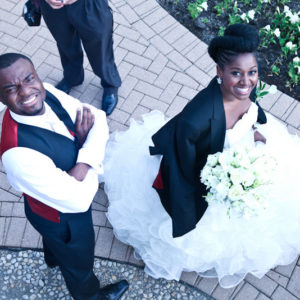 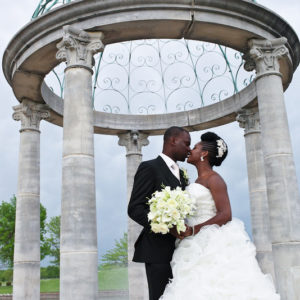 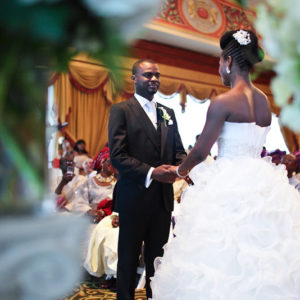 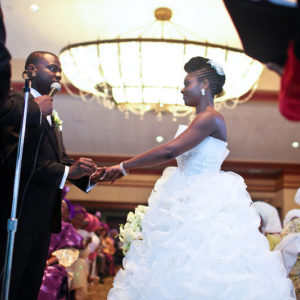 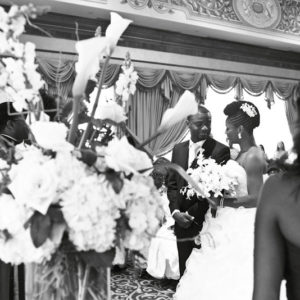 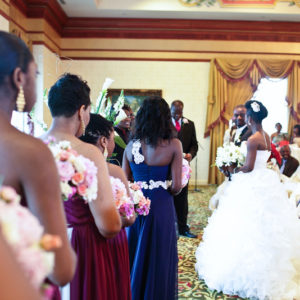 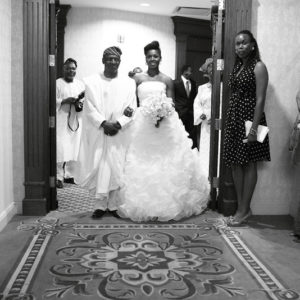 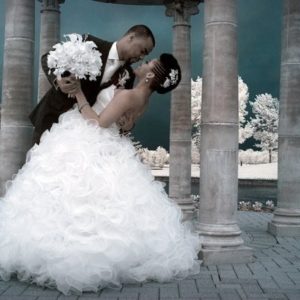 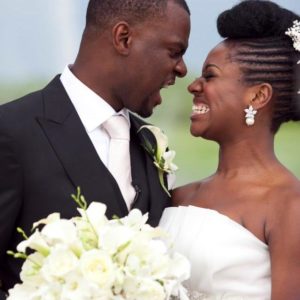 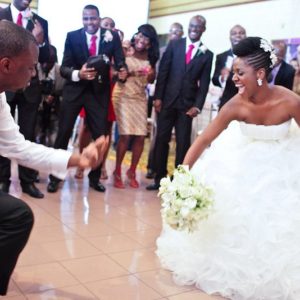 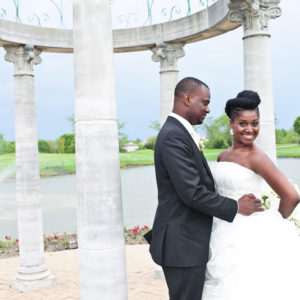 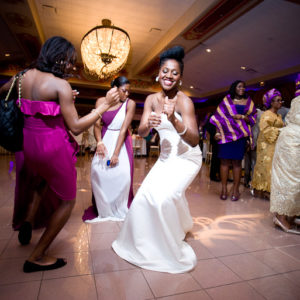 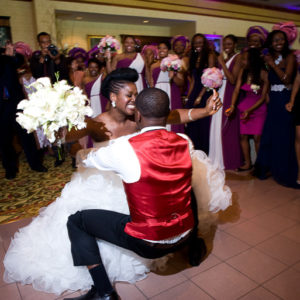 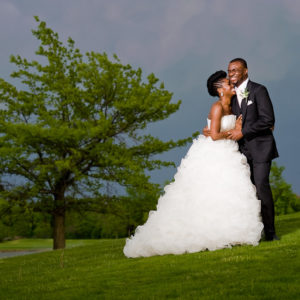 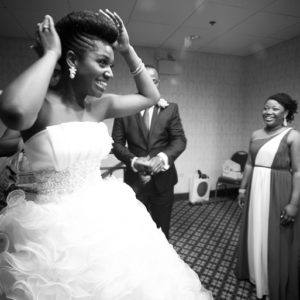 Your hair is beautiful! and all those beautiful pictures! Look at my Naija people shining as ever. CONGRATULATIONS AYO!!

Beautiful! The pictures, the dress and of course the hair!

Everything about this wedding was.….magnificent. The pictures, the dresses (your dress is just.…hmmm lol). The makeup, the MEN! And most importantly…the hair. Your stylist put her foot in that hairstyle and you wore it to perfection.

Congratulations and many blessings to your marriage! 🙂

Congrats! Would love to see the tutorial for that hairstyle!! Your pics were fabulous! Blessings.

I am pretty speechless. You are already absolutely beautiful and your hair, dress, & ambiance are just devine. I can feel the love and energy of you and your husband through the pics. Congratulations!

my dear, nothing do you, sha! fine girl. and i see you picked a fine igbo boy for yourself. welcome to the tribe.

Beautiful pictures, beautiful hair, beautiful couple, beautiful wedding. ABSOLUTELY BEAUTIFUL!!! Many blessings to you and hubby on this marriage journey 🙂

Simply beautiful! Wish you a very long and happy marriage.

May God Bless your union, Ayodele.

Beautiful ceremony and banging hair. You all make gorgeous couple.

She looks absolutely amazing! And these photos are inspiring! So glad to see this. I’ve missed the Natural Brides updates!

This is classy and elegant. Not to mention your photographer was the absolute bomb.com! I love these natural brides sections. I am nowhere near marriage but for my mother, the thought of me walking down the aisle with my afro in all her glory is the most horrifying picture! I love showing her all these beautiful women who stay true to themselves and just say no to the hot combs, wigs, weaves, and creamy crack on their special day! Many blessings and much happiness to the couple. Black love truly is beautiful!

“for my mother, the thought of me walking down the aisle with my afro in all her glory is the most horrifying picture!”

I almost peed laughing so hard! BTW, same with my mom, Lol!

Congratulations Ayodele! You and your husband make a handsome couple and the joy of your day just shines through! All the best to you both.

Congratulations Ayo, you look beautiful in the photos. I really like your dress and your hair is fab.

Beautiful couple! Your hair is fly and so is the dress! Many blessings to you and your family!

Beautiful couple, the bride is gorgeous, love the hair.
Follow me at IAmGoldGorgeous

I can’t get over how happy she looks in every picture. You can tell they are superbly in love, and the pic where she is wearing his jacket awwwwwww
She looks beautiful and they pics are fab, looked like a fun wedding

well, thank u for ur article,

I love it..I’m also Nigerian and it’s not often I get to see a natural Nigerian bride! That hairstyle, the dress, the pictures — they are DIVINE. =) Congratulations, Ayo — blessings to you & your hubby!

Congrats on the beautiful wedding and your hair looked Gorgeous. The photographer did a terrific job on the photos.

Ayodele You Look Absolutely Stunning. Beautiful Pictures. Your Day Looked So Much Fun and I Loved The Nigerian Head-Wraps I Saw In Up In There. Congratulations x

Beautiful hair and husband and photos, just an entire amazing package, much happiness to the two of you!

Absolutely beautiful couple, the two of you should be in some wedding magazine or something! Gorgeous

Just beautiful! Congrats and many blessings to you both!

This is so nice and fantastic.
I love it and will like to know more about the hairstyle and ask some questions.
Can you send me your email please?
Thanks.

will entice readers to subscribe to your blog if your information is good, and it’s a great way to get people to visit your blog more often for the good email tips that they are looking for.plus, when you write relevant…