when a spritz goes wrong… 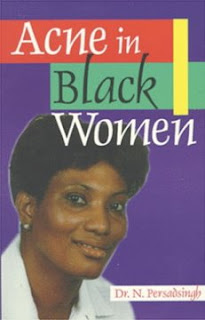 So since I did my big chop in late 06, I’d always used some kind of hair butter or cream as a daily moisturizer. But after reading many testimonials, I decided to jump on the “daily spritz” bandwagon. I started spritzing with diluted suave coconut conditioner (before a castor oil seal), then upgraded to a diluted herbal essences conditioner.

And that’s when my face got furious. My skin broke out in a MAJOR way, pumping out oil faster than a Middle Eastern desert… Look, I got pimples where no human being should ever get pimples… (I didn’t want to get graphic… but yes, I did get a neck pimple… or two…)

I panicked, and tried everything to combat this — stressing less (yeh, uh… that didn’t really work), upping my bentonite facial regimen, drinking TONS of water… I even tried Proactiv for a while. None of this worked.

And then I made the connection between my “awesome” spritz and my ever expanding acne.

Apparently, microscopic rivulets of spritz were traveling down my face and inflaming my skin (ok, that is totally unscientific… I don’t know exactly how the spritz got there, but it got there…)

I quickly axed the herbal essences diluted spritz, and downgraded to a more natural rose water spritz… but my face still didn’t like it.

So my spritz saga has ended entirely, and I’m back to my trusty hair butters/creams.
I understand the moisturizing and conditioning effects of the spritz… but if I want to increase the moisture in my regimen, I’m just going to have to step my co-wash (conditioner/wash) game up.

A hard lesson learned (with the blemishes to show)… but hey, it’s a journey.
*sigh

I’ve had to sell/swap many products so that I can reinvest my money into what does work for me with out the outbreaks. I feel your pain.

Aww sorry to hear that L. Has your skin cleared up since stopping the spritz? If it hasn’t then it could be something else.

I’m not a spritzer but I apply HH intensive mask as a creamy moisturizer and seal with coconut oil or jojoba oil. Sometimes I do coconut oil only.

I didn’t think spritzing should have such an effect as it is a light mist directed at the hair.

i’ve had that problem too, even ready-made spritzs like S‑curl cause me to break out.

I knew it! You have no idea how much I feel like this post is specifically for me to see. I am wearing a frown today to match the 2 new zits on my face. And what do you know? I’ve been increasing my moisture regimen too! Fly hair and a greasy face is so unsexy! And why is this happening on Memorial Day Friday?? Ughh, I’m anxious to see what light the sisters can shed.

At least you found a reason for your acne! I’ve been battling this crap since I was 11 years old and I’m 26 now…fun stuff. I’ve tried everything known to man and I’m still not as clear as I’d like to be. Oh well, I’m thankful for life, health, strength, a FINE husband, and my beautiful curls. :o)

@ everyone… oh my gosh! i am overwhelmed by everyone’s responses, lol… up until last night when i was working on this post, i felt like pulling it cuz i was like, ‘nah. no one will relate to this.’ LOL!

i’m glad to report that my face is clearing up. i am DONE with any kind of spritz. i’m just really frustrated and annoyed by this whole fiasco.

in a way, i think it goes to show that product junky-ism has serious consequences. if it ain’t broke, DON’T FIX IT!

When my hair was longer, I had this problem too. It’s really a pain. Anyways, I’ve found that consistently including flax (ground flax seed, flax oil etc) and oatmeal into my diet has helped clear my skin in the long run. Just a tip, hope it helps.

Why not just spritz with water? That’s the “moisturizer” I use before sealing in with coconut and castor oils. I have to pin my hair back to keep it off my face, otherwise i would break out, too. I started using African Black Soap last summer, and it works wonderfully. I have breakouts less frequently and they aren’t as severe. Just a note, the first two weeks of using the soap, my face had a fit. But it cleared up.

I had to stop using Miss Jessie’s Buttercream in my twists because it was making me break out.

Now I use Shea butter and coconut oil which keep my skin clear. Some times I even apply them to my face as a moisturizer.

I like Aloe Vera in my hair but I have to keep it away from my face because it makes me break out.

lol yea i usually do my daily spritz before i shower so that i can give my face and neck a good wash afterwards. plus i like the steam suana that’s created in my shower cap with the water and heat! 🙂

I buy this (http://www.vitacost.com/Reviva-Labs-Rosewater-Facial-Spray-576‑R) spray and use it on my face and hair, as necessary. It’s formulated for normal to oily skin, so it doesn’t break me out, but it has all sorts of good for my hair ingredients like rosewater, glycerin, aloe juice and various herbs. And it’s cheap!

When I really want to combat acne, I pour some of my spray in a smaller bottle and add some tea tree oil. It works wonders.

OMGoodness!!! I thought I was the only one that went through this. Last year I started this whole ecostyler gel and leave in conditioner regimen, I wouldn’t do it daily, but for some reason my face broke out so badly. I did the freaking out too and started using so many products which made my face worst. That was the worst my face has ever been, I still have the scars to show.

How did I miss this oh my goodness I’m the QUEEN of pimples LMAO!! Nah just playing but I did notice certain things breaking me out more. The ic fantasia glosser broke me out I didn’t think a hair product could so I stopped that a long time ago.My actual spritz doesn’t I think because its really watery and alot of the things in it I actually can use on my face and not have a bad reaction *glycerin, jojoba oil water etc…that and the fact I now bend my neck back when I drench my hair. My cheeks are… Read more »

I’ve never been a spritzer but after reading the posts on how great they are I was about to give them a try this week. I wanted to use a water mixed with some various oils because I’d tried water before and it makes my hair draw up. But now after reading these posts I’m not so sure.  But I’ve been using heavy hair oils for a year or so on my hair. I also sometimes use coconut and olive oils on my face when it’s too dry and I haven’t had any problems with my skin, except for my pimple… Read more »

i feel ur pain but i dont get pimples from spritzin, i get pimples in and around the area of my ear and it sooooooo annoying bcuz the bumps around and in my ear make ppl think i have a ear infection but its not its bcuz of the spritzing and when i accidently leave a lil conditioner around that area

i was having a break out issue and i put two and two together it was actually my cleansers! horrible cycle cleansers over dried, face would over produce oil, face would break out.

did a little research and started cleaning my face with mix of 10% olive oil 90% castor oil. works miracles! i havent had a break out in forever.

oh wow! Sorry to hear that…I use a very simple spritz on water mixed with glycerine and a nickel drop of Shea Moisture shea butter leave-in conditioner…I have acne-prone skin but this hasn’t given me any probs. I used to seal with castor oil but don’t bother anymore as I found my hair became too greasy. I hope you find a better alternative 🙂

I’ve been breaking out since starting my hair journey and I didn’t even think to wonder about my hair products. I may need to look into that.

Repping JA I see. I have this book.

you probably irritated your skin and/or damaged it. there’s this forum on acne.org where people have tried the “no washing their face” method and it really does help. you have to let this dead skin mask come on your face and then after a while start to peel it off or peel it off when it’s become too noticeable. just go on the website and use the search engine.

I was in total denial about what was causing my break outs, I’ve NEVER had any achne issues and the only thing I added to my daily regiment was my spritz.…thanks 4 digging my head out the sand