Are Some Castor Oils Bad For Your Hair? 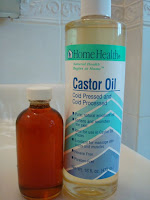 Question for J from Eliss:
Greetings!! This is Eliss, and I’m sending this email in hopes of attaining some information. I’m starting to use castor oil on my hair, but while doing my mini research, I’ve been noticing people saying there is a difference in castor oil and that some castor oils (the ones used as laxatives) aren’t good for your hair; instead you should use other brands (i.e. Jamaican Black Castor Oil).
So is this true? Is there a difference in the types of castor oils?
Thanks!
‑E

Jenteel’s response: well, the castor bean itself is poisonous (12 beans can be fatal to a human!), but the castor oil extracted from the bean is antifungal, anti-inflammatory, has anti-dandruff properties and is useful for skin conditions/ailments including eczema, moles and calluses. castor oil makes a great massage oil for ailing joints, helps in inducing labor/after birth, and has been used for cancer patients to prevent lumps and cysts. you can also make castor oil packs for severe abdominal and back pain (when you rub it between your hands it heats up). this makes it a wonderful oil to use in deep conditioning treatments.

any pure castor oil can be used as a laxative, but should only be used for 10 days at the most. i would suggest you always purchase “cold pressed” castor oil. using heat yields more oil, but degrades the flavor, nutritional value and color of the oil. cold pressed is a more expensive process extracting the oil at a lower temperature. you can get cold pressed castor oil at health food stores, “the vitamin shoppe” or online. i would keep away from the castor oils in pharmacies. some of them are overly refined for human consumption. the “black” castor oil is unrefined, i believe it retains the most nutrients. i get my black castor oil from haiti, but most people order the jamaican one online. but as long as you’re using cold pressed clear you should be ok. 🙂

so cheaper ones may not be as good quality, but isn’t bad for the hair? my understanding is that as as we don’t use it so much for its nutritional properties, but its humectant properties, whether it is cold-pressed or not does not really matter. Does it??? 🙂

Thanks ladies!!! I love this blog *smile*.

I had no idea one is better than the other. Thanks for the info

I just bought some cold pressed castor oil a few days ago. It has the same consistency of glycerin, which I like. I think I like it better than shea butter.

@ lita
hmmm…it matters to me b/c i use it for the nutritive benefits to the scalp. the clear one in the pic only costs $8 and it lasts forever so it’s worth it to me. but even though it’s good quality, i favor the unrefined (black) for my scalp because i believe it retains even more of the goodies 🙂 if you have a castor oil that is not cold-pressed that works well for you humectant-wise, then go for it.

I love this blog but i will like to see you mention your sources when you say things like that about products and their effect on the body, i mean scientific sources our reliable sources. If not i’ll like to hear more nuance in the post. It is very important. I personally do not know about castor oil but you said so many things…and even specialists give their sources. I have read things in previous posts that were accurate and others that were not at all and i think you are doing an awesome job so why not extend it… Read more »

thanks Jenteel, this makes sense. i don’t use it on my scalp, so my concerns are differnt. i must say i did think thatjamaican castor oil was nicer to use. 🙂

now brand is my fav for castor. I want to try the jamaican blk, but i dont feel like dealing with shipping. Ive made a balm that I seal my hair with & I have noticed that it has cut down on knots on my ends SUBSTANTIALLY!!!.. I mean they r damn near non existant. I was in whole foods & recomended castor to this one sister who had really nice thick hair.…

@ kadiane certain things about herbs, oils and the like i just know from years of studying naturopathy, nutrition, health, herbalism and alternative medicine and putting this knowledge into practice. (i don’t feel the need to state my credentials on this blog.) in cases of haircare, i have gained knowledge thru the many years of being natural, hence thru my own experience. these are the reasons why leila asked me to contribute to this blog. there is so much information that is never shared and i wish to assist others so that they don’t have to learn the hard way.… Read more »

@ msjaim
i feel you! i hate having to ship anything! i will search high and low to make sure i can’t find it around the way first!

soooo so what’s in your secret balm? 😉

Good post! I didn’t know about the antifungal and anti-inflammatory properties, or the dandruff control. But since I started using castor oil, and other natural oils I have been dandruff free, my head rarely itches, and my roots are actually soft for once. I use castor oil from a heath food store but I have never tried black castor oil.

I’ve never used the jamaican black one. I just use a reg one from my local health food store. It’s cold pressed.

Thanks for sharing this info. I had no idea that the bean itself is poisonous!

Hey I have that Castor oil in the picture! lol the cold pressed one.

I usually use it as a mix in something else… I haven’t used the castor oil by itself much because it left my hair feeling oily (duh lol) and I hate the way that feels.

As my hair grows out we’ll see about it!

@ kadiane
Man, I read Jenteel’s response and it sounded like she blasted you, but I know better as I am an certified BGLH junkie. This is just the way she writes. She is straight up and that is what I love about her postings and comments. I noticed that you did not comment back, so I hope you did not take offense. This is excellent information!

@ lux deluxe and kadiane… no blasting, at all. but since j won’t talk about her credentials, i will. she has a master’s degree in public health, and has worked extensively in the public health industry and wellness industry. she has training in the sciences (biology and chemistry), and has been successfully natural for a decade. her hair is thick, healthy and nearly waist-length and she’s been answering hair questions for longer than most of us have been natural.  if there was ever a post where information wasn’t linked back to sources, it was probably one of mine, lol. i’m… Read more »

I have to add too that J is one of the very few health professionals who is willing to give alternative medicine a fighting chance. Frankly she is ahead of her time because I can forsee a time when the natural path will be the way forward. I say this as a scientist who makes artificial subsititutes to mimic naturally occurring materials and realizes that nothing beats natural.  Not all scientists are cite while you write people. This does not mean the scientific process is lacking. The same in depth research will be presented just in a more readable/accessible format.… Read more »

Another great post Jenteel. A lot of times the use of different products is trial and error. What works for some won’t work for others(do your own research if necessary). Fortunately for me my hair likes the Home Health Brand and the more expensive brand Jamaican Black Castor Oil-JBCO. I add the cheap oil to my conditioner(rinse out) and I apply the JBCO on my ends after twisting.

ive heard a lot about this.. i dont think ive tried any of them yet…but i need to, good post!

I’m with you! Haitian Castor Oil is the best!

good stuff! IMO, when ever you but a natural oil like castor oil, or olive oil, you want to get the “First Cold Press”.….

I use regular castor oil from an organic online store and it works great — I add to DC’s or pre-poo with it or put some on my damp hair after washing. I like it so much I was psyched to try Jamaican black castor oil thinking it would take my hair to the next level — NOT! I was so shocked I kept re-visiting it in different ways hoping to get lucky but no luck — it ALWAYS left my hair coated, dry and very, very hard. Each time I had to re-wash. And I bought from a reputable… Read more »

Jenteel your information is always very helpful…I am trying to find an answer to a question that I have… Does the raw unfiltered Jamaican Black Castor Oil ever expire? I just purchased some and it has a weird smell…since there is no expiration date on the bottle I was wondering if all black castor oil has a strange smell or is it possible that it is rancid??

wow!that’s a great question!!  i would think like any other oil it could go rancid. most oils i have purchased have a shelf life of 1–2 years. what’s the smell? black castor oil should smell “nutty” (which may be weird to you if you don’t like that). i’ve had my black castor oil for over a year and i’ve had no problems with it (change in appearance, viscosity, etc). i know that the clear ones tend to have an expiration date going out 1–2 years so i would follow the same idea with the black castor oil, but i’m not… Read more »

Thank you because I had just ask some one that question and I was about to use pharmacy castor on my daughters hair .

I know this is an old post. But hopefully someone will still get back to me. The reason I don’t purchase castor oil is because the employees who extract the oil from the toxic beans experience high rates of cancer and are not protected. Are you aware of any castor oil production companies that protect their employees and do not contribute to any exploitation? thanks.