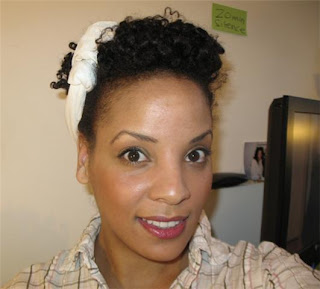 Hi Ladies, I write to you from London, England. I am still a newbie- I went Natural in January, but have been researching, taking classes and product testing like crazy. I started a blog at the same time I went natural to talk about going natural in the UK because there didn’t seem to be a blog about it- at least I haven’t found it. I also am the organizer for the London Natural Hair and Sisterlocks Meet Up group, of which there are 150 members. 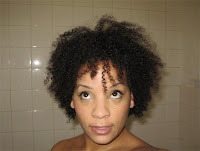 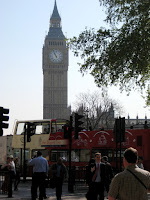 BGLH: Where are you from?
CHERRYLOLA: I’m originally form Toronto Canada. I currently live in London, England.

BGLH: What’s interesting about the place where you live?
CHERRYLOLA: Gosh, London is a wild place. All the little boroughs in London used to actually be villages, which ended up growing into each other to create this huge city, so each section of London varies wildly from the next. You never know what you going to find walking street to street. Also, about 6 million people live in London, but as a major tourist and business destination, about 11 million people pass through London on any given day. So you never know who you’re going to meet.

BGLH: What is the climate/weather like?
CHERRYLOLA: Mostly grey. And rain. That rumour about London is true. Mild winters, Mild summers.

BGLH: What is the natural hair scene like?
CHERRYLOLA: It’s definitely growing. I am the organiser of a Natural hair meet-up group and everyday at least 1 new person joins. Overall, my experience [being natural] has been great!

BGLH: Where do you buy your hair products?
CHERRYLOLA: At the moment, mostly at the local drugstore or chemist, such at Boots or Superdrug. Sometimes you will find me in a Black beauty supply store. Once in a while Sally’s. Plus I’ve been mixing my own conditioner, so I pick up ingredients online, as well as Anita Grant products.

BGLH: What do you like about being natural in your country?
CHERRYLOLA: Standing out. Although natural hair is catching on, there are far more weaves and wigs on female heads

BGLH: What would you like to see in your country in terms of natural haircare?
CHERRYLOLA: I would like to see more healthy hair. I’d love for everyone to be natural, but mostly I just want to see Black and mixed race girls with healthy heads. Fewer bad weaves. Fewer bald spots. Less broken hair. Fewer hair salons that do us more damage then good. This is going to have to start with educating ourselves about what hair care means. It also means speaking up. I am trying to learn as much as I can, and putting what I learn online. Blogs like yours are great resources!

I would like to see the death of the relaxer. I’d like it to die quickly, but if there was legislation put into effect that required proper training and a license before using such harsh chemicals, then I’d be happy with that too. Prohibition of using relaxers on children under 16 might be a good idea. L says~I never thought of that before… so interesting! I read recently about a mother relaxing hair 5 year old daughters hair. Things like that have to stop.

I’d also like to see two changes in the Black Beauty Supply Stores.
1. More natural products in stock.
2. Owned by more black and mixed race women who know about hair. At the moment I’ve yet to find one owned by someone who has hair like me

I want us all to keep talking. The more of us talking about natural hair, the more likely it is to spread. I found the natural hair “movement” through a YouTube video. Some found out about it through blogs. Others, on forums. The more in your face about it we are the more it likely it will spread.

The words of a true visionary. Thank you Cherry Lola!

lovely photos cherry! the 1st one is so retro — got me thinking “luuuucy!”(in a cuban accent).

i like what you had to say about relaxers. i don’t believe relaxers should be banned all together, unlike many of my natural counterparts. women of color are too creative to restrict style options. i think we should be more focused on safety measures/training concerning the practice of relaxing. and i also agree that little children/young adolescents should not have relaxers. especially since i feel there is a health and safety factor that should be considered in applying chemicals to one’s scalp.

I KNOW! her style is lovely!

nice post Cherry — I moved to Ottawa from London last summer and do not miss the drippy weather one bit. but I’ll probably be returning this autumn for good so your meet up group is something I’d like to be a part of.

oh yes, and its so true what you say about the black beauty supply shops — they mostly seem to be owned by indians/pakistanis who tend to look down their noses at the customers (guess they know that alot of that human hair weave comes from their own women)

I love Cherry Lola. Her blog is great.

And I agree with her that the LDN natural scene is growing.

Great interview — again I was re-introduced to her by BGWLH :o)

well the number of weaves and what-nots in London seems, to me, to be fairly recent. i don’t think things are quite set in stone in the same way as in the states (i’ve never heard of anyone catching flak for being natural per se, perhaps more for wearing certain styles. it is nice to have a self-conscious natural community though, i enjoy being a member.

thanks for all the great comments guys! Stay Curly!